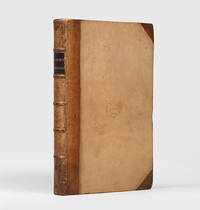 Mathematical Collections and Translations: The first Tome. In two parts.

London: printed by William Leybourn,, 1661. The Dialogo's first appearance in English 2 parts in 1 volume as issued, folio (338 x 219 mm). Nineteenth-century half calf, brown cloth sides with the emblem of University College London stamped in gilt, marbled endpapers. With 4 folding plates, numerous printed diagrams and woodcut and copper engravings in text. Bound without half-title and errata leaf. Minor rubbing to binding, trivial splits to first plate folds, tiny chip to PP1, XX1, HHH, XXX2 FFFF1, small chip to corner of MMM4, small burnhole to GGGG2, none of these affecting text. Stain in bottom corner of final section, with last few leaves a little frayed, creased and soiled. A well-preserved, crisp copy. First edition in English of Galileo's Dialogo, the major work to be included in volume I, and the first vernacular translation in any language. The Systeme of the World, followed by the short but important Epistle to the Grand Dutchesse Mother concerning the Authority of Holy Scripture in Philosophical Controversies (known today as the Letter to Christina), was only the second work of Galileo's to be published in England. It preceded the Latin edition, published in London by Thomas Dicas, by two years and remained the only vernacular translation for two centuries. Apart from the two works by Galileo, Salusbury included seven other translations from Italian and Latin in volume I of his Collections. The second volume, including an extensive life of Galileo in part two, was published in 1665 but almost totally destroyed in the Great Fire of London. The Brereton-Macclesfield copy is apparently unique in containing both parts. Provenance: Benjamin Robert Mulock (1829-1863), presented by to him by University College London in 1849 as a prize in mathematics, with their presentation bookplate and gilt supralibros to covers; Mulock was one of the earliest photographers of Brazil, and documented the construction of the Bahia and San Francisco railroad. The copy was subsequently sold at Sotheby's in 1969 where it was bought by Quaritch, and later entered the private collection of the art collectors Howard and Linda Knohl, with their Fox Pointe Collection bookplate. ESTC R19153; Taylor 268; Wing S517.

calf
Calf or calf hide is a common form of leather binding.  Calf binding is naturally a light brown but there are ways to treat...[more]
leaves
Very generally, "leaves" refers to the pages of a book, as in the common phrase, "loose-leaf pages." A leaf is a single sheet...[more]
rubbing
Abrasion or wear to the surface. Usually used in reference to a book's boards or dust-jacket.
First Edition
In book collecting, the first edition is the earliest published form of a book. A book may have more than one first edition in...[more]
folio
A folio usually indicates a large book size of 15" in height or larger when used in the context of a book description....[more]
soiled
Generally refers to minor discoloration or staining.
plate
Full page illustration or photograph. Plates are printed separately from the text of the book, and bound in at production. I.e.,...[more]
Cloth
"Cloth-bound" generally refers to a hardcover book with cloth covering the outside of the book covers. The cloth is stretched...[more]
crisp
A term often used to indicate a book's new-like condition. Indicates that the hinges are not loosened. A book described as crisp...[more]
bookplate
Highly sought after by some collectors, a book plate is an inscribed or decorative device that identifies the owner, or former...[more]
gilt
The decorative application of gold or gold coloring to a portion of a book on the spine, edges of the text block, or an inlay in...[more]
errata
Errata: aka Errata Slip A piece of paper either laid in to the book correcting errors found in the printed text after being...[more]