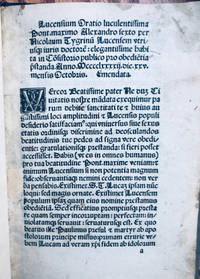 Rome: [Andreas Freitag],15 October 1492, 1492. Later black roan & gray boards, spine letters gilt.Binding slightly worn, first leaf lightly soiled. Ex-libris Walter Goldwater. Oration such as this are usually rare and short this one is both it is a tribute from the City of Lucca to the election of Pope Alexander VI. This is one of three almost simultaneously published prints of this on October 25, 1492 before the newly elected Borgia Pope Alexander VI. held this speech. - "This was the typical 'Oratio' - in the style of the times, both florid and unctous - which extolled the virtues of the Pope, traits which subsequent events failed to confirm!" (Bühler) According to Bühler's study, The Freitag printing was preceded by the editions of Stephan Planck (in Roman type) , whose corrections Freitag employed in his edition." CF Bühler, The Earliest Editions of the "Oratio" (1492) by Nicolaus Tygrinus (in: Gutenberg JB 1975, pp. 97-99)" Goff T563; HC 15751*; Pell Ms 10972; CIBN T-51; Nice 209; IGI 9670; IBE 5542; BMC IV 137; United States of America Baltimore MD, The Walters Art Museum Library Bryn Mawr College, Goodhart Medieval Library Library of Congress, Rare Books Division New York, Columbia University, Butler Library San Marino CA, Huntington Library Southern Methodist Univ., Bridwell Library Southern Methodist Univ., de Golyer Library New Haven CT, Yale University, Beinecke Library Andreas Freitag and most of the of other Roman printers of note, Have Gernan names which might indicate German birth and education. This conclusion is warranted by their occasional use of Gothic types for devotional books of inferior size. A few unnamed Italians were connected with these early printing houses, but mainly as patrons or money-lenders. They did not desire to have their names appear as partners. Freitag printed one book at Gaeta dated 1487, then he turns up in Rome in 1492 and seems to have been still printing 1495. Quarto, A4. 7¾ x 5 inches First Edition (see below). This copy is bound in lBound in a vellum printed leaf bay Jenson 1497T. Ex-libris Walter Goldwater.

Seller rating:
This seller has earned a 5 of 5 Stars rating from Biblio customers.
Biblio.co.uk member since: 2009
PRINCETON, Massachusetts
Ask Seller a Question

For the last 30 years I have been selling Early Printed Books.I have a daily rare book blog at www.Jamesgray2.wordpress

quarto
The term quarto is used to describe a page or book size. A printed sheet is made with four pages of text on each side, and the...[more]
spine
The outer portion of a book which covers the actual binding. The spine usually faces outward when a book is placed on a shelf....[more]
New
A new book is a book previously not circulated to a buyer. Although a new book is typically free of any faults or defects,...[more]
First Edition
In book collecting, the first edition is the earliest published form of a book. A book may have more than one first edition in...[more]
vellum
Vellum is a sheet of specialty prepared skin of lamb, calf, or goat kid used for binding a book or for printing and writing. ...[more]
gilt
The decorative application of gold or gold coloring to a portion of a book on the spine, edges of the text block, or an inlay in...[more]
soiled
Generally refers to minor discoloration or staining.