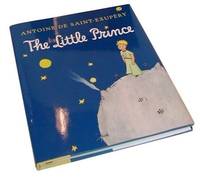 UK,slim 8vo HB+dw/dj,1st edn thus.FINE/FINE.No owner inscrptn and no price-clip to dw/dj.Bright,crisp,clean,matt,colour pictorial artwork,by Antoine de Saint-Exupery illustrated dw/dj panels with white+yellow lettering to front; with negligible shelf-wear or creasing to edges and corners - no nicks or tears present.Top+ fore- edges bright and clean; contents bright,tight,clean,solid and sound - pristine - no dog-ear reading creases to any pages' corners,appears unread - apart from my own collation.Bright,crisp, clean,sharp-cornered,publisher's original plain dark blue cloth bds decorated with a single,small yellow star towards top corner of front bd,a yellow cloth blind spine with black printed ink lettering; a sewn-in,navy blue silk bookmark ribbon and immaculate plain white eps.UK,8vo HB+dw/dj,1st edn,1-83pp [paginated] includes,XXVII (27) chapters,profuse full+part-page b/w+colour illustrations - all by de Saint-Exupery,interspersed throughout the text and the book,plus [unpaginated] 2pp blanks,half-title page,double-page colour illustrated title page,a dedication (to Leon Werth),a title separator page with Richard Howard's translator's note to its reverse,a 1pp epilogue with author's potted biography to its reverse.
Author's only children's book,written and illustrated by himself and published in French as 'Le Petit Prince (1943).First published in America,in both French and English - as both a Ltd Edn (500 copies) and a trade edn - translated by Katherine Woods.The first [UK] English translation appeared two years later,again translated by Katherine Woods and published in 1945 by Heinemann.This English translation by Richard Howard originally in 2000. A pilot stranded in the desert awakes one morning to see,standing before him,the most extraordinary little fellow. "Please",asks the stranger,'"draw me a sheep." And the pilot realizes that when life's events are too difficult to understand,there is no choice but to succumb to their mysteries.He pulls out pencil and paper . . . Thus begins this wise and enchanting fable that,in teaching the secret of what is really important in life,has changed the world forever for its readers.Often seen as a symbol of childhood innocence,Antoine de Saint-Exupery's best-selling book 'The Little Prince.' is as cherished by children and adults alike,across the globe. Ideal for children aged 7 and up.This beautiful edition contains the definitive translation and all the original coloured and restored illustrations.'The Little Prince.' joins the ranks of 'A Little Princess.', 'The Secret Garden.' & 'Peter Pan.' as a genuine children's classic of the 20thC. Antoine de Saint-Exupery was born in 1900 in Lyon.In 1921,he began his training as a pilot By 1926,he had became one of the pioneers of international postal flight.In 1935 he embarked on a record-breaking attempt to fly from Paris to Saigon.Nineteen hours into the flight,his plane crashed in the Sahara desert.He survived the crash but spent three days battling dehydration,limited food and hallucinations.On the fourth day,the was rescued.In part,this experience was the inspiration for 'The Little Prince.' He continued to fly until World War II,during which he took self-imposed exile. On 31 July 1944,a year after the book's publication in 1943,whlst he was serving with Free French Forces in Morocco,he disappeared over the Mediterranean while flying a reconnaissance mission for his French air squadron.
Since April 2013 and again in March 2015,and in this year too,the UK Post Office has altered it's Pricing in Proportion template, altering it's prices,weight allowances,dimensions and lowered it's qualifying compensation rates too!
So,please contact rpaxtonden@blueyonder.co.uk ,because of the lighter weight of this item for correct shipping/P+p quotes - particularly ALL overseas buyers - BEFORE ordering through the order page!

The Little Prince, published in 1943, is French aviator Antoine de Saint-Exupéry's most famous novella. Saint-Exupéry wrote it while living in the United States. It has been translated into more than 180 languages and sold more than 80 million copies making it one of the best selling books ever. An earlier memoir by the author recounts his aviation experiences in the Saharan desert. He is thought to have drawn on these same experiences for use as plot elements in The Little Prince.

NO books will be sent 'ON APPROVAL' unless paid for in full and invoiced accordingly and with appropiate Registered/Recorded/Insurance,where applicable.If returned/declined monies refundable (P+p and any processing fees excluded). Other returns/refunds, only if book(s) are misdescribed,and then a) matches the invoice sent with it, b) returned in original packaging and state/condition sent out in,and received by buyer, c) and returned at the seller's original and actual shipping/P+p cost used when despatched to buyer - any excess cost borne at returnee's own expense. Notification of intent of return, required within 2 days of receipt of book please. 30 day return guarantee, for refund, (excluding P+p costs and any processing fees), for up to 30 days after delivery, only if an item arrives either misdescribed or damaged.Other returns accepted at seller's discretion. Orders processed same day,subject to time of receipt of order and payment, by end of P.O's business day, where applicable, and despatched the same day (weekends excluded). Shipping/P+p costs are based on books weighing 2.2Lb,or 1KG and UNINSURED, unless quoted otherwise. If your book order (P+p cost included/excluded) is in excess of 20.00 GBP,heavy or oversized, as per instruction, we'll contact you to let you know if extra shipping/insurance is required.Prices are nett, worldwide shipping/handling and registration/ insurance fees are extra.Books/orders in excess of 20.00 GBP will only be sent with appropriate insurance fees. So,for actual insured/registered shipping costs, prior contact with the seller, BEFORE ordering, is required at: rpaxtonden@blueyonder.co.uk. All orders are wrapped in sellophane, then either bubble-wrapped or corrugated-card and then boxed.[US+CANADA only.] Items/orders over 20.00 GBP are automatically sent registered/insured either via PARCEL FORCE [insured].Or, International SIGNED For [insured] AIRMAIL,minimum of 6.50 GBP,in addition to P+p and subject to book('s) weight.Books WILL NOT be sent without appropiate Registered/Recorded/Insurance,where applicable.We use the Royal Mail for inland (UK)and most overseas deliveries.For most other International destinations,for orders/books in excess of 20.00 GBP,we use Royal Mail International Registered/SIGNED For minimum of 6.50 GBP (100gm),in addition to postage and subject to book('s) weight.UK addresses, orders/ books in excess of 20.00 GBP, sent Next Day Guaranteed Delivery [Minimum Insured up to 250 GBP automatically - at no fee,extra insurance can be bought upto 1,000 GBP and Maximum 2,500 GBP - enquire for costs.], minimum of 5.90 GBP per order, again subject to weight.

Seller rating:
This seller has earned a 5 of 5 Stars rating from Biblio customers.
Biblio.co.uk member since: 2009
PLYMOUTH., Devon
Ask Seller a Question

Bookdealer/seller established 1984, selling used,new,out-of-print,collectable (vintage and TV tie-in p/backs etc.), modern and second-hand books and book-related ephemera.We specialise in Children's Illustrated books,Modern Firsts,Fiction and Non-fiction - a good, wide range of subjects - Nautical, Naval/ Military,Theatre+Film biography/ autobiography, GENERAL (non-fiction/ reference),author SIGNED copies/edns, and other Collectables.I no longer have a B&M store (established 1984) since 1996,as I then became an internet- based seller exclusively,continuing with Mail Order selling as well.Viewing by arranged appointment(s),book searches undertaken and welcomed.Minimal grade of stock is VG/VG (the exception), the majority around FINE/FINE.[Criteria used - as a bibliophile myself,would I want to see this book on my own personal bookshelves!!] Welcome,and thank you for browsing my stock - enjoy!"WE HAVE WHAT YOU WANT, THOUGH YOU MAY NOT KNOW IT!!"

spine
The outer portion of a book which covers the actual binding. The spine usually faces outward when a book is placed on a shelf....[more]
title page
A page at the front of a book which may contain the title of the book, any subtitles, the authors, contributors, editors, the...[more]
edges
The collective of the top, fore and bottom edges of the text block of the book, being that part of the edges of the pages of a...[more]
Cloth
"Cloth-bound" generally refers to a hardcover book with cloth covering the outside of the book covers. The cloth is stretched...[more]
bds
Common term for the covers of a hardbound book.  The term 'boards' refers to the thick cardboard under the paper or cloth...[more]
morocco
Morocco is a style of leather book binding that is usually made with goatskin, as it is durable and easy to dye. (see also...[more]