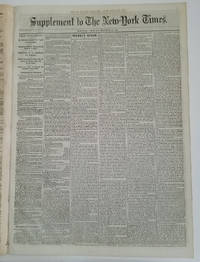 Lincoln's Third State of the Union Address and Amnesty Proclamation

Lincoln's Third State of the Union Address and Amnesty Proclamation

Contains Lincoln's entire 1863 Message to Congress, where he reaffirmed his commitment to emancipation, as well as His Proclamation of Amnesty and Reconstruction, which laid out a plan to return the rebellious states to the Union fold. Commonly called the "Ten Percent Plan," it allowed for a state to hold new elections when 10% of its 1860 voters took a loyalty oath to the Union.

"To now abandon them would be not only to relinquish a lever of power, but would also be a cruel and an astounding breach of faith. I may add at this point that while I remain in my present position I shall not attempt to retract or modify the emancipation proclamation, nor shall I return to slavery any person who is free by the terms of that proclamation or by any of the acts of Congress."

Throughout the fall of 1863, eventual Union victory became increasingly clear, and on December 8, 1863, Lincoln issued his Proclamation of Amnesty and Reconstruction. This lenient plan that offered citizens of the rebellious states full pardons, voting, and property rights (except possession of slaves), encouraged the states to begin addressing the issue of the freedmen and women without compromising their rights, and allowed a former Confederate state to hold elections and form a pro-Union government once 10% of the number of voters in the 1860 election swore loyalty oaths. Commonly called the "Ten Percent Plan," it reflected both Lincoln's charitable view of Reconstruction as well as the reality that heavy penalties, denial of voting and property rights to rebels, and impoverishing the South was no way to rebuild a nation after a war fought, at least initially, to preserve the Union.

30 day return guarantee, with full refund including shipping costs for up to 30 days after delivery if an item arrives misdescribed or damaged. Authenticity guaranteed for the life of the book or document.