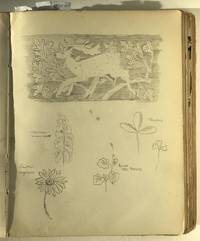 Archive of letters, photographs, drawings, published books and articles of Percy A Wells (1867-1956), a cabinet maker and disciple of William Morris, who lectured, taught and wrote extensively during the later phase of the Arts and Crafts movement in Britain.

Wells, whose typescript autobiography is included in the archive followed an apprenticeship in London's City Road with early practice as a cabinet maker before working alongside William Lethaby at the Central School and subsequently leading the cabinet department at the Shoreditch Technical Institution in London. His two most significant works, both published by Batsford, were Modern Cabinet Work (1909) which brought him to a wider audience and Furniture for Small Houses (1924) but as revealed by this archive, his work went much wider.

Starting with the endpapers Wells has used almost every page for drawings, some vignette sized, many full page. There are variations on William Morris such as 'Border Designs - Corners from W. Morris Books', a series of heraldic shields credited to Morris and a full page attempt at what seems to be a graphic tribute to Morris with the names of 'Dante Rossetti Madox Brown Burne Jones' contained within a column in the right margin and the slogan 'ARTS. CRAFTS. POETRY. BEAUTY. BROTHERHOOD' at the foot of the page.

Much of the sketchbook is dedicated to drawings for furniture and other design such as tiles, architectural details, often connected to Wells' emergent book projects, thus 'Fences and Gates. Screens Chapt ?' There are several early pages of stylised art nouveau influenced flower drawings, including irises, and many other attempts to incorporate the natural world into design as Wells examined and noted the 'Geometry of leaf'. There are a couple of pages of experiments with lettering including a possible commission for 'The Ruskin Gallery' and 'The Passmore Edwards Gallery', copies from tapestries, medieval manuscripts and much more.

LETTERS (25 items) Writing on Kelmscott Manor paper, June 1922, May Morris thanks Wells for his letter and 'the cheque. Will you please tell the students how very much I appreciate their help' - probably with her fund raising in efforts for the Memorial Hall at Kelmscott, signed in full. In a 1910 letter the furniture designer Ambrose Heal writes asking for 'your criticism on a piece of modern furniture design'.

Marjorie Quennell writes about a museum consultantship and an ALS from the artist and designer Selwyn Image proposes a talk on 'the start and development of the Arts and Crafts Society and Movement' (1922). Additional correspondence regarding the presentation of several awards to Wells including the Royal Society of Arts' Silver Medal in 1909.

PHOTOGRAPHS
Around 40 silver gelatin photographs of furniture, many used as illustrations in Wells' books and labelled as such to verso. Contained within an envelope labelled in a later hand: 'Furniture designed by Percy Wells. (Including Shoreditch)...'

Small sheaf of personal photographs including images of Wells in old age gardening in Dulwich. Two photographs of a house exterior project in New Barnet, with Wells' handwritten explanations overleaf of 'treatment of Wall with trellis and boxes' and additional larger furniture photographs.

PORTFOLIO containing typescript, ribbon copy, of 'Fifty Years in the Furniture Trade' by Percy Wells, 1934, a short autobiography which describes Wells' poor background, his apprenticeship in the City Road as a cabinet maker; mentored by Stephen Webb and W R Lethaby and then teaching work at Central School and Shoreditch Technical Institute. Exhibition ephemera including the Exhibition of British Industrial Art, 1933; sheaf of Wells' drawings of church details at Long Melford, Kersey and Lavenham; rubbings of lettering pieces by 'P Wells' from the 1930s each carefully annotated with time spent on the commission; 2 folders of articles, annotated by Wells; reviews of his books; certificates for various awards and group photos; press reports of his lectures etc, etc.

[Percy A Wells] Practical Education and School Crafts, 1924', Wells has marked his contribution at page 112

[Percy a Wells] Boys' Clubs in War-Time, article by PAW

[Percy A Wells] An Introduction to Handicrafts in Clubs, 1933, National Association of Boys' Clubs, 'P A Wells' to upper cover - this anonymous work was written by Wells. Covers chipped and detached

Seller rating:
This seller has earned a 2 of 5 Stars rating from Biblio customers.
Biblio.co.uk member since: 2013
Leeds, West Yorkshire
Ask Seller a Question

Modern First Editions (shortly to rebrand as Christian White Rare Books) buys and sells great books and manuscripts in the best condition we can find them. We love manuscripts, annotated books and association copies. We serve collectors of all ages, means and taste, and have built relationships with libraries and librarians in the UK, the USA and across the world. We all need books!

quarto
The term quarto is used to describe a page or book size. A printed sheet is made with four pages of text on each side, and the...[more]
title page
A page at the front of a book which may contain the title of the book, any subtitles, the authors, contributors, editors, the...[more]
Poor
A book with significant wear and faults. A poor condition book is still a reading copy with the full text still readable. Any...[more]
New
A new book is a book previously not circulated to a buyer. Although a new book is typically free of any faults or defects,...[more]
inscribed
When a book is described as being inscribed, it indicates that a short note written by the author or a previous owner has...[more]
vignette
A decorative design or illustration placed at the beginning or end of a ...[more]
offprint
A copy of an article or reference material that once appeared in a larger publication.
wrappers
The paper covering on the outside of a paperback.  Also see the entry for pictorial wraps, color illustrated coverings for...[more]
verso
The page bound on the left side of a book, opposite to the recto page.