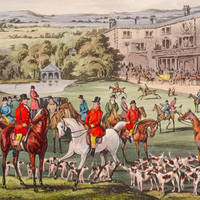 LIfe of a Sportsman, The

LIfe of a Sportsman, The

London: R. Ackermann, Eclipse Sporting Gallery, 1842. First Issue The "Rich In Interest" Classic With 36 Hand-Colored Aquatints [ALKEN, Henry, illustrator]. NIMROD (pseud. of Charles J. Apperley). The Life of a Sportsman. With Thirty-Six Coloured Illustrations by Henry Alken. London: R. Ackermann, Eclipse Sporting Gallery, 1842. First edition, first issue with four plates on India paper mounted on plate paper, and plate at p. 348 in first state. Octavo (9 1/2 x 5 3/4 in; 243 x 145 mm). vi, [2, contents], 402, [10, catalog] pp. Thirty-four hand-colored aquatint plates. Extra engraved aquatint title page, vignettes and portrait. Publisher's original blue cloth with gilt vignette and border blocked in blind, expertly recased. Gilt decorated spine. All edges gilt. New endpapers in pale yellow as original. A fine copy. Housed in a quarter blue morocco drop-front clamshell box. "When Lockhart said of 'Nimrod' that he could 'hunt like Hugo Meynell and write like Walter Scott,' he was doubtless excited into exaggeration by the pleasure of having hit upon a man who could write of sport without the vulgarity of Egan...The Life of a Sportsman, published in 1842, contains a very pleasant account of country life in days when sport was no longer confused with debauchery; while its descriptions of runs to hounds, its lore of hunting and of four-in-hand driving, and its variety of incident and anecdote make it still both valuable and agreeable. Apperley, though not a Walter Scott, was a good writer; he knew his subject thoroughly, on both the scientific and the personal sides, and this work of fiction, though poor in plot, is rich in interest" (Cambridge History of English and American Literature, Volume XIV. The Victorian Age, Part Two. Ch. 15, Nimrod). Charles J. Apperley (1778-1843) "began writing for the Sporting Magazine. From his boyhood his ruling passions had been hunting, horse-riding, and horse management...Apperley's expert knowledge and social status made him an invaluable recruit to the sporting press of the time, and he may even be said to have created the role of gentleman hunting correspondent. Writing at first under various pseudonyms (Acastus, Eques, and A), he published his first article for the Sporting Magazine as Nimrod in January 1822 and he subsequently usually used that nom de plume. For five seasons, from 1824 to 1828, he was the magazine's official representative...Many of his articles were in serial form and were subsequently published as books, notably his Memoirs of the Life of John Mytton (1837) and The Life of a Sportsman (1842)... his ability and authority were unquestioned. He earned the respect of sportsmen everywhere not only for his skillful and fearless riding but also for the knowledge and judgment he displayed in his writings and for his unrivaled experience of the hunting world. As Nimrod he held a unique position in his day and left an imperishable memory in sporting history" (Oxford DNB). Podeschi 167. Siltzer, p. 73. Schwerdt I, p. 36. Tooley, 65.

We will extend to you a 48-hour approval period on all items that are purchased sight unseen. If you are not completely satisfied with the item simply contact us within 48 hours after receipt, and then return it in the same condition you received it for a full refund, less freight charges, or any related costs including credit card transactions, taxes, and duties levied, especially when returning from other countries.

Seller rating:
This seller has earned a 5 of 5 Stars rating from Biblio customers.
Biblio.co.uk member since: 2007
Calabasas, California
Ask Seller a Question

Cloth
"Cloth-bound" generally refers to a hardcover book with cloth covering the outside of the book covers. The cloth is stretched...[more]
Poor
A book with significant wear and faults. A poor condition book is still a reading copy with the full text still readable. Any...[more]
octavo
Another of the terms referring to page or book size, octavo refers to a standard printer's sheet folded four times, producing...[more]
vignette
A decorative design or illustration placed at the beginning or end of a ...[more]
title page
A page at the front of a book which may contain the title of the book, any subtitles, the authors, contributors, editors, the...[more]
first state
used in book collecting to refer to a book from the earliest run of a first edition, generally distinguished by a change in some...[more]
gilt
The decorative application of gold or gold coloring to a portion of a book on the spine, edges of the text block, or an inlay in...[more]
spine
The outer portion of a book which covers the actual binding. The spine usually faces outward when a book is placed on a shelf....[more]
New
A new book is a book previously not circulated to a buyer. Although a new book is typically free of any faults or defects,...[more]
plate
Full page illustration or photograph. Plates are printed separately from the text of the book, and bound in at production. I.e.,...[more]
morocco
Morocco is a style of leather book binding that is usually made with goatskin, as it is durable and easy to dye. (see also...[more]
fine
A book in fine condition exhibits no flaws. A fine condition book closely approaches As New condition, but may lack the...[more]
First Edition
In book collecting, the first edition is the earliest published form of a book. A book may have more than one first edition in...[more]
clamshell box
A protective box designed for storing and preserving a bound book or loose sheets. A clamshell box is hinged on one side, with...[more]
edges
The collective of the top, fore and bottom edges of the text block of the book, being that part of the edges of the pages of a...[more]