home rare books Law More Rare Books from The Lawbook Exchange Ltd The Law Against Bankrupts, Or, A Treatise Wherein the Statutes.. 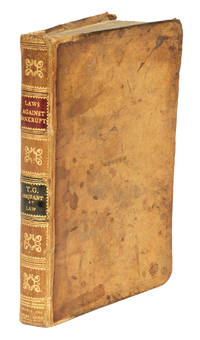 The Law Against Bankrupts, Or, A Treatise Wherein the Statutes..

The Law Against Bankrupts, Or, A Treatise Wherein the Statutes..

1694. London: Printed for Richard Southby, 1694. 1st ed.. London: Printed for Richard Southby, 1694. 1st ed. First Edition of the First English Treatise on Bankruptcy G[oodinge], T[homas]. The Law Against Bankrupts: Or, A Treatise Wherein the Statutes Against Bankrupts are Explained, By Several Cases, Resolutions, Judgments and Decrees, Both at Common Law and Chancery. Together with the Learning of Declarations and Pleadings Relating Thereunto. To Which are Likewise Added Forms and Directions for Commissioners, And Presidents, Fit for the Perusal of Lawyers, Or Merchants and Tradesmen. [London]: Printed for Richard Southby, 1694. [xxxii], 275, [29] pp. Title page and preface signed "T.G." Octavo (7" x 4-1/2"). Contemporary sheep, rebacked, blind rules to boards, blind crest to center of front board, gilt ornaments and red and black lettering pieces to spines, early hand-lettered title to fore-edge of text block. Light staining to boards, which are slightly bowed, corners bumped and somewhat worn, small crack near head of rear board, front hinge cracked, rear hinge starting, upper corner lacking from rear pastedown, faint early owner annotation to front pastedown, small mark in ink to rear pastedown, some creases, faint dampstains and edgewear to endleaves, front free endpaper partially detached. Light toning to interior, faint dampstaining to head of text block in a few places, light soiling to title page. $1,850. * First edition. Goodinge's was the first English treatise on bankruptcy, and also the first statement on the subject by a common (rather than civil) lawyer. It was reissued in 1695. The second edition was published in 1701, with a 1704 reissue. The third edition followed in 1713, with a 1719 reissue; a fourth in 1726. All are scarce. OCLC locates 6 copies of the first edition in North America, 5 in law libraries (Duke, Library of Congress, Ohio State, University of Pennsylvania, Yale). English Short-Title Catalogue R177531.

All items are offered subject to prior sale.

We are happy to accept orders by telephone, fax, e-mail or through our website. We welcome visitors, although an advance contact is advised. Our office hours are: Monday through Friday from 10 AM to 6 PM.

Terms: Appropriate sales tax will be added for residents of New Jersey. Foreign remittances must be in U.S. dollars, by check drawn on a U.S. bank, by international money order, or by wire transfer. We accept Visa, MasterCard, Discover Card and American Express credit cards.

Warranty & Returns: Any item may be returned within fourteen (14) days of receipt for any reason; prior notification is necessary and returned items must be carefully packed and arrive safely.

On-Line Catalogues: Our latest catalogues, some featuring specific subjects and special offers, can be viewed on our website.

We purchase books on topics similar to those which appear in our inventory, and appreciate offers of either single items or whole collections.

Seller rating:
This seller has earned a 5 of 5 Stars rating from Biblio customers.
Biblio.co.uk member since 2005
Clark, New Jersey
Ask Seller a Question

About The Lawbook Exchange Ltd

Founded in 1983, The Lawbook Exchange, Ltd. is devoted to all aspects of law and its history. It has two main components. The Antiquarian Book Department offers a wide range of Continental, British, and American books, manuscripts, and ephemera from the medieval era through the twentieth century. The Publications Department offers reprints of over 1,000 landmark or otherwise interesting works, many with newly commissioned introductions, and several original publications. The Lawbook Exchange also offers appraisals and provides assistance with collection development. Originally a company that serviced law firms exclusively, it now serves thousands of lawyers,scholars, and institutions worldwide.

First Edition
In book collecting, the first edition is the earliest published form of a book. A book may have more than one first edition in... [more]
hinge
The portion of the book closest to the spine that allows the book to be opened and closed.
text block
Most simply the inside pages of a book. More precisely, the block of paper formed by the cut and stacked pages of a book.... [more]
title page
A page at the front of a book which may contain the title of the book, any subtitles, the authors, contributors, editors, the... [more]
rebacked
having had the material covering the spine replaced. ... [more]
cracked
In reference to a hinge or a book's binding, means that the glue which holds the opposing leaves has allowed them to separate,... [more]
octavo
Another of the terms referring to page or book size, octavo refers to a standard printer's sheet folded four times, producing... [more]
gilt
The decorative application of gold or gold coloring to a portion of a book on the spine, edges of the text block, or an inlay in... [more]