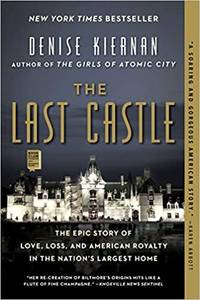 The Last Castle: The Epic Story of Love, Loss, and American Royalty in the Nation's Largest Home

The Last Castle: The Epic Story of Love, Loss, and American Royalty in the Nation's Largest Home

Orphaned at a young age, Edith Stuyvesant Dresser claimed lineage from one of New York's best known families. She grew up in Newport and Paris, and her engagement and marriage to George Vanderbilt was one of the most watched events of Gilded Age society. But none of this prepared her to be mistress of Biltmore House.

Before their marriage, the wealthy and bookish Vanderbilt had dedicated his life to creating a spectacular European-style estate on 125,000 acres of North Carolina wilderness. He summoned the famous landscape architect Frederick Law Olmsted to tame the grounds, collaborated with celebrated architect Richard Morris Hunt to build a 175,000-square-foot chateau, filled it with priceless art and antiques, and erected a charming village beyond the gates. Newlywed Edith was now mistress of an estate nearly three times the size of Washington, DC and benefactress of the village and surrounding rural area. When fortunes shifted and changing times threatened her family, her home, and her community, it was up to Edith to save Biltmore—and secure the future of the region and her husband's legacy.

This is the fascinating, "soaring and gorgeous" (Karen Abbott) story of how the largest house in America flourished, faltered, and ultimately endured to this day.

We are e-commerce based independent bookseller since 2016. We carry hundreds of new and out-of-print books at reasonable prices. Every item listed in our online stores is either shipped by Amazon Fulfillment Center or shipped directly from our warehouse. We ship internationally. You can also check our live listings on Amazon, eBay and Mercari!

Seller rating:
This seller has earned a 2 of 5 Stars rating from Biblio customers.
Biblio.co.uk member since 2016
Brooklyn, New York
Ask Seller a Question

We have many years of experience and knowledge in selling on the web and we carry hundreds of books at reasonable prices. We offer lightning quick shipping. Most of our orders are shipped the same day they are received and have tracking numbers uploaded to Biblio with 24-48 hours. Every item listed in our online store is housed in a single location which makes it possible for us to pack and ship all orders at once.