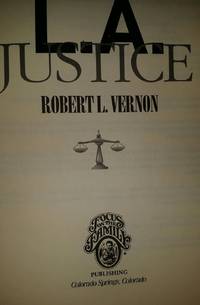 Focus On The Family Pub, 1993. First edition. Hardcover. Very Good/good. Cover and interior designer: Jeff Stoddard. Editor Larry K. Weeden.. Dust jacket is in good condition showing some wear. Covers are in very good condition showing only slight wear at edges. Pages are clean and unmarked. The great drama began routinely enough. State Highway Patrol and L.A. police were chasing a suspected drunk driver in the early morning hours of Sunday, March 3, 1991. After the driver, Rodney King, was stopped, however, history-making events unfolded. In what appeared to be a display of excessive force, captured on a home videotape, the officers hit King repeatedly with their batons. They kicked him as well, and King had to be hospitalized for treatment of his injuries. Assistant Chief Bob Vernon was on duty as acting chief the day the story hit the news, and in L.A. Justice he provides the inside view of how the LAPD responded to those events. When the tape was televised, cries of outrage rained down on the LAPD. In the weeks and months that followed, many people, including Mayor Tom Bradley, portrayed the department as racist and demanded the resignation of Chief Daryl Gates. Some in law enforcement, including Bob Vernon, knew that civil unrest was likely to occur at the end of the trial of the four officers charged in the King incident. So plans were made and training was ordered to ensure the police were prepared. Now, for the first time, those plans are described.- Copyright 1993 by author. - Cover and interior designer: Jeff Stoddard. Editor Larry K. Weeden.- - see pictures maybe this will do it! I try to note all defects,so you can make an informed buying decision-At least you know what you're getting into I have-good description- pictures, books can be an expensive purchase, All of the photos shown are actual pictures no stock ima Title L.a. Justice: Lessons from the Firestorm Author Robert L. Vernon Publisher CreateSpace Independent Publishing Platform, 2011 ISBN 1460948424, 9781460948422 Length 288 pages Subjects Biography & Autobiography › Law Enforcement bIB 1974MK Blk 9

need this right away maybe a gift can be sent carefully packed in a flat rate priority mail envelope. Just choose at check out

Seller rating:
This seller has earned a 5 of 5 Stars rating from Biblio customers.
Biblio.co.uk member since 2013
Los Angeles, California
Ask Seller a Question

jacket
Sometimes used as another term for dust jacket, a protective and often decorative wrapper, usually made of paper which wraps... [more]
pub
Common abbreviation for 'published'
First Edition
In book collecting, the first edition is the earliest published form of a book. A book may have more than one first edition in... [more]
edges
The collective of the top, fore and bottom edges of the text block of the book, being that part of the edges of the pages of a... [more]