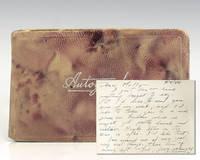 1944. Scarce autograph note signed by J.D. Salinger on April 4, 1944, two months and two days before he saw combat at Utah Beach on D-Day. One page from an oblong octavo autograph album bound in full leather, the note is dated 4/4/44 and reads, "Dear Molly - I just don't have anything bright to say. But I'd like to send you some of my work, and I'd like to take you to a nice place in London where we might get pretty drunk and mellow. Maybe later in The War or after. I'd like that. You remind me of very real things. There aren't many left. - Love, Jerry Salinger." The recipient, Molly Bocock was stationed at the School for Military Intelligence in Smedley's Hydro, Matlock, Derbyshire where she befriended a number of American servicemen training at the school, including Salinger, then a young writer who had submitted several short stories to The New Yorker, all of which were rejected with the exception of his Manhattan-set story, Slight Rebellion off Madison, about a disaffected teenager named Holden Caulfield with "pre-war jitters". Salinger was drafted into the army in the spring of 1942, several months after the United States entered World War II, where he saw combat with the 12th Infantry Regiment, 4th Infantry Division. He was present at Utah Beach on D-Day, in the Battle of the Bulge, and the Battle of Hurtgen Forest. During the campaign from Normandy into Germany, Salinger arranged to meet with Ernest Hemingway, who was then working as a war correspondent in Paris. The meeting had a profound effect on Salinger and the development of his writing style; Hemingway was impressed by what Salinger shared with him of his early writing and the two corresponded frequently throughout the war. Salinger was later assigned to the 4th Counter Intelligence Corps in which he used his proficiency in French and German to interrogate prisoners of war and later witnessed the liberation of one of the Dachau Concentration Camps. Salinger continued to write and submit stories to the New Yorker throughout his wartime years, which would have a lasting effect on his life and writing. It was not until 1952 that Salinger's first, and best-known, work The Catcher in the Rye was published to mixed initial reactions. The autograph album includes several additional signatures and inscriptions from American servicemen training at the School for Military Intelligence as well as a number of signatures from guests at the Cumberland Hotel, including the signature of Beverley Nichols. Laid in is a newspaper clipping from the March 5, 1968 issue of the Evening Standard featuring a book review of Salinger's Raise High the Roofbeam, Carpenters and Seymour, An Introduction by Richard Lister. An exceptional note, signed by Salinger at a pivotal time in his life, before the wartime experiences that would plague him later in life and contribute to his withdrawal from society. Best-known for his novel The Catcher in the Rye, American author J.D. Salinger published several short stories and five books throughout his lifetime. In a contributor's note Salinger gave to Harper's Magazine in 1946, he wrote: "I almost always write about very young people," a statement that has been referred to as his credo. Adolescents are featured or appear in all of Salinger's work, from his first published short story, "The Young Folks" (1940), to The Catcher in the Rye and his Glass family stories. In 1961, the critic Alfred Kazin explained that Salinger's choice of teenagers as a subject matter was one reason for his appeal to young readers, but another was "a consciousness [among youths] that he speaks for them and virtually to them, in a language that is peculiarly honest and their own, with a vision of things that capture their most secret judgments of the world." For this reason, Norman Mailer once remarked that Salinger was "the greatest mind ever to stay in prep school.

octavo
Another of the terms referring to page or book size, octavo refers to a standard printer's sheet folded four times, producing... [more]
New
A new book is a book previously not circulated to a buyer. Although a new book is typically free of any faults or defects, "new"... [more]