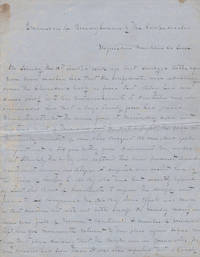 INVASION OF PENNSYLVANIA BY THE CONFEDERATES (MANUSCRIPT TITLE)

INVASION OF PENNSYLVANIA BY THE CONFEDERATES (MANUSCRIPT TITLE)

First Edition
In book collecting, the first edition is the earliest published form of a book. A book may have more than one first edition in... [more]
New
A new book is a book previously not circulated to a buyer. Although a new book is typically free of any faults or defects,... [more]
G
Good describes the average used and worn book that has all pages or leaves present. Any defects must be noted. (as defined... [more]