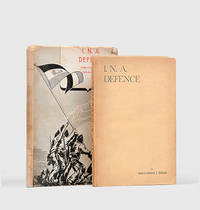 Bombay & Delhi Congress Publication Board & I.N.A. Defence Comittee,, 1946 & [1945?]. Impassioned and important defence of the right to take up arms in the cause of independence Octavo. Original publisher's boards, title in black to spine and front cover. With the pictorial dust jacket, the design adapting the famous image "Raising the Flag on Iwo Jima". Original publisher's wrappers. Both housed in tricolour cloth drop-back box, the colours of the INA flag with spinning wheel device in blue, I.N.A. gilt to the spine. Copy in boards: half-tone portrait frontispiece of Desai and one similar plate. Copy in wraps: one half tone plate with portrait of Desai. Copy in Boards: Inscribed on front pastedown "To [illegible] from Aloo. January 1946". Boards a little rubbed, text block a little browned. A very good copy in the dust jacket, which is a little chipped and foxed but with only very minor loss around the top of the spine. Copy in wrappers: wrappers lightly rubbed. A very good copy. Two contemporary publications of the address delivered by Desai in defence of the members of the Indian National Army on trial for treason, both produced around the same time (December 1945-January 1946). Scarce, the Congress Publication Board edition shows only one location on Library Hub (BL), the INA defence committee edition shows three. In October 1945, three officers from the pro-independence INA, which had formed a rebel government during the war and claimed the right to use military means to claim India's sovereignty, were court-martialled. The leading counsel for their defence was the veteran independence activist, Bhulabhai Desai. His speech at the trial became an instant classic. Drawing examples from the American declaration of Independence and Garibaldi's revolution, as well as quoting extensively from Churchill arguing in favour of rebel movements, he asserts the rights of the INA to use force to win Indian independence. These are two distinct editions of this speech. One in boards, published in January 1946 by the Indian National Congress, includes an introduction by Indian lawyer, M.C. Setalvad, who later became India's first Attorney General. The copy in wraps, published by the INA Defence Committee, contains an introduction dated December 27th, 1945 and, therefore, was probably released either at the very end of 1945 or early in 1946. The introduction was written by Kailash Nath Katju, another member of the defence counsel.

plate
Full page illustration or photograph. Plates are printed separately from the text of the book, and bound in at production. I.e.,...[more]
foxed
Foxing is the age related browning, or brown-yellowish spots, that can occur to book paper over time. When this aging process...[more]
spine
The outer portion of a book which covers the actual binding. The spine usually faces outward when a book is placed on a shelf....[more]
jacket
Sometimes used as another term for dust jacket, a protective and often decorative wrapper, usually made of paper which wraps...[more]
wrappers
The paper covering on the outside of a paperback.  Also see the entry for pictorial wraps, color illustrated coverings for...[more]
device
Especially for older books, a printer's device refers to an identifying mark, also sometimes called a printer's mark, on the...[more]
inscribed
When a book is described as being inscribed, it indicates that a short note written by the author or a previous owner has...[more]
text block
Most simply the inside pages of a book.  More precisely, the block of paper formed by the cut and stacked pages of a...[more]
Cloth
"Cloth-bound" generally refers to a hardcover book with cloth covering the outside of the book covers. The cloth is stretched...[more]
gilt
The decorative application of gold or gold coloring to a portion of a book on the spine, edges of the text block, or an inlay in...[more]
octavo
Another of the terms referring to page or book size, octavo refers to a standard printer's sheet folded four times, producing...[more]