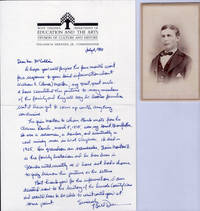 IMPORTANT WILLIAM S. "BUCK" MORTON LETTER REGARDING THE KILLING OF JOHN HENRY TUNSTALL AND MORTON'S IMMINENT FATE AT THE HAND OF THE REGULATORS

IMPORTANT WILLIAM S. "BUCK" MORTON LETTER REGARDING THE KILLING OF JOHN HENRY TUNSTALL AND MORTON'S IMMINENT FATE AT THE HAND OF THE REGULATORS

South Spring River, N. M.: William S. "Buck" Morton, 1878., 1878. First edition. First edition. This grouping consists of four separate items: 1). Four, 11 1/2" x 8 3/4" single-sided pages, hand-written in ink, from William S. "Buck" Morton to his distant relative, attorney Hunter Holmes Marshall in Richmond, Virginia. Dated March 8, 1878; 2). Carte de Visite (CDV) of William Morton, 3 1/2" x 2 1/4," mount size 4" x 2 1/2," N. BROWN & SON photographer's imprint on verso. Buck Morton was a Dolan employee and posse member; 3).Included is a circa, 1927 envelope from when Elizabeth Garrett sent the letter on loan to Maurice Fulton, the Roswell, New Mexico historian; 4). Provenance: From Jarvis Garrett to Robert McCubbin. From Robert McCubbin: "This came to me from Jarvis Garrett. It was something that he would not part with until the very end, when his wife was concerned about his health.... Obviously, one of my favorite things in the collection." This is one of the most important epistolary artifacts from the commencement of the Lincoln County War. Buck Morton, involved with the posse who shot Tunstall and subsequently accused of Tunstall's murder, is captured by the Regulators and is being held captive on Chisum's Ranch. Morton writes about Tunstall's shooting, and about his own surrender to the Regulators, whom he lists by name. He writes that he has been told he is being taken to Lincoln, but also doubts he will see Lincoln alive. He keeps hoping he might make it, but it seems clear that he knew he would not. The complete letter reads as follows: H. H. Marshall, esq., Richmond, VA. South Spring River N. M.. Mch. 8, 1878. Dr Sir: Some time since I was called upon to assist in serving a writ of attachment on some property wherein resistance has been made against the law. The parties had started off with some horses which should be attached, and I as deputy sheriff with a posse of twelve men was sent in pursuit of same. We overtook them and while attempting to serve the writ our party was fired on by one J.H. Tunstall the balance of his party having run off. The fire was returned and Tunstall was killed. This happened on the 18th of February. The 6th of March I was arrested by a Constable party accused of the murder of Tunstall. Nearly all of the sheriff's posse fired at him and it is impossible for any one to say who killed him. When the posse which came to arrest me and one man who was with me, first saw us, about one hundred yards distant we started in another direction, when they (eleven in number) fired nearly one hundred shots at us. We ran about five miles, when both of our horses fell and we made a stand when they came up they told us if we would give up they would not harm us. After talking awhile we gave up our arms and were made prisoners. There was one man in the party who wanted to kill me after I had surrendered, and was restrained with the greatest difficulty by others of the party. The Constable himself said he was sorry we gave up as he had not wished to take us alive. We arrived here last night en route to Lincoln. I have heard that we were not to be taken alive to that place. I am not at all afraid of their killing me but if they should do so I wish that the matter should be investigated and the parties dealt with according to law. If you do not hear from me in four days after receipt of this I would like you to make inquiries about the affair. The names of the parties who have me arrested are R.M. Brewer, J.G. Skirlock [sic], Chas. Bowdre, Wm Bonney, Henry Brown, Frank McNab, "Wayt" Sam Smith, Jim French (and two others named McCloskey & Middleton who are friends). There are two parties in arms and violence expected. The military are at the scene of disorder and trying to keep peace. I will arrive at Lincoln the night of the 10th and will write you immediately, if I get through safe. Have been in the employ of Jas. J. Dolan & Co, of Lincoln for 18 mo's since 9th Mch, 77. Have been getting $60.00 per month have about six hundred dollars due me from them and some horses &c; at their cattle camps. I hope if it becomes necessary that you will look into this affair. If anything should happen I refer you to T.B. Catron US Attorney Santa Fe N.M. and Col. Rynerson Dist. Atty. Le Messilla N.M. They both know all about the affair as the writ of attachment was issued by Judge Warren Briscol La Messilla N.M. and everything was legal. If I am taken safely to Lincoln, I will have no trouble but let you know. If it should be as I suspect, please communicate with my brother Quin Morton Lewisburg W.VA. Hoping that you will attend to this affair if it becomes necessary and forgive me for troubling you if it does not. I remain Yours Respectfully / W.S. Morton" Fine copies of important Lincoln County War information.

Seller rating:
This seller has earned a 4 of 5 Stars rating from Biblio customers.
Biblio.co.uk member since: 2006
Greencastle, Pennsylvania
Ask Seller a Question

First Edition
In book collecting, the first edition is the earliest published form of a book. A book may have more than one first edition in...[more]
fine
A book in fine condition exhibits no flaws. A fine condition book closely approaches As New condition, but may lack the...[more]
New
A new book is a book previously not circulated to a buyer. Although a new book is typically free of any faults or defects,...[more]
verso
The page bound on the left side of a book, opposite to the recto page.