Home Peter Harrington I Know a Lot of Things. 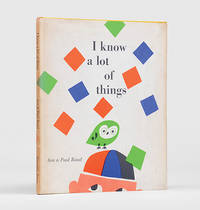 I Know a Lot of Things.

I Know a Lot of Things.

New York: Harcourt, Brace and Company,, 1956. First edition of the Rands' first children's book Quarto. Original yellow cloth, titles to spine in yellow on red, to front board in red, orange and blue endpapers. With dust jacket. Illustrated throughout by Paul Rand. Bookplate of John Lewis to front pastedown. Spine slightly cocked, extremities lightly rubbed. An excellent copy in a lightly toned and rubbed jacket with a few small chips and nicks, and a short tear to rear fold. First edition, first printing. Between 1956 and 1970, Ann and Paul Rand produced four children's books together, of which this is the first. Paul Rand (1914-1996) was an American commercial artist who, together with his wife Ann, produced four picture books combining rhythmic verse with illustrations exhibiting Paul's interest in Swiss Style graphic design. Rand is best known for his corporate logo designs, including the logos for IBM, UPS, Enron, Morningstar, Inc., Westinghouse, ABC, and Steve Jobs's NeXT. Rand also was a professor emeritus of graphic design at Yale University in New Haven, Connecticut from 1956 to 1969, and from 1974 to 1985

First Edition
In book collecting, the first edition is the earliest published form of a book. A book may have more than one first edition in...[more]
cocked
Refers to a state where the spine of a book is lightly "twisted" in such a way that the front and rear boards of a book do not...[more]
A.N.
The book is pristine and free of any defects, in the same condition as ...[more]
bookplate
Highly sought after by some collectors, a book plate is an inscribed or decorative device that identifies the owner, or former...[more]
jacket
Sometimes used as another term for dust jacket, a protective and often decorative wrapper, usually made of paper which wraps...[more]
Cloth
"Cloth-bound" generally refers to a hardcover book with cloth covering the outside of the book covers. The cloth is stretched...[more]
spine
The outer portion of a book which covers the actual binding. The spine usually faces outward when a book is placed on a shelf....[more]
quarto
The term quarto is used to describe a page or book size. A printed sheet is made with four pages of text on each side, and the...[more]