Home Peter Harrington I Didn't Get Over", two draft manuscripts and typescripts, with holograph corrections, for the short story. 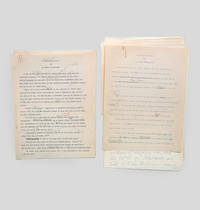 I Didn't Get Over", two draft manuscripts and typescripts, with holograph corrections, for the short story.

I Didn't Get Over", two draft manuscripts and typescripts, with holograph corrections, for the short story.

[Asheville, NC: Grove Park Inn, summer, 1936]. The first and last draft manuscripts for a published short story, given by Fitzgerald as a gift to his obliging young typist First draft: 20 leaves, various sizes (largest 330 x 214 mm), partly triple-spaced typescript with pencil holograph amendments, completed in pencil manuscript. Second draft: 9 pages (US Letter: 11 x 8.5 ins), double-spaced typescript with pencil holograph amendments. Two original drafts, the first draft and the second and final draft, for Fitzgerald's short story "I Didn't Get Over", written in summer 1936 and published in Esquire magazine that October. The most noticeable differences between the two drafts are at the beginning and end of the piece. The title is slightly changed: in the first draft, it is "I Never Got Over"; in the second, that is amended in manuscript to "I Didn't Get Over". In the story, a former army captain who failed to make it to the front in the First World War confesses his responsibility for a training-camp accident that claimed the lives of several soldiers. At the end, the second draft, Fitzgerald adds in pencil the coda that makes the identity of the army captain clear: "I was that captain, and when I rode up to join my company he acted as if he'd never seen me before. It kind of threw me offbecause I used to love this place. Wellgood night." The summer of 1936 was a difficult one for Fitzgerald. From February to April 1936, he had published the essays in Esquire magazine that are now well known as The Crack-Up, the articles that helped invent confessional journalism, in which he revealed the collapse of his life and his hopes, and his determination to save himself with his art. A year or so later, he would begin work on his last, unfinished novel, The Last Tycoon. From the collection of James B. Hurley. In 1936, having just graduated from Brown University with a BA in English, Hurley left his hometown of Providence, RI and went to North Carolina looking for work. He answered a classified ad to do some typing and found himself employed by F. Scott Fitzgerald. Hurley typed Fitzgerald's manuscripts, which were written in longhand, on a Remington portable designed for double-spaced work. Fitzgerald wanted his his first drafts triple-spaced in order to edit between his lines, so Hurley turned the roller and carriage by hand to provide three spaces. Hurley worked for Fitzgerald for nine months, at the end of which Fitzgerald inscribed three of his novels to Hurley and presented him with the manuscripts of two short stories, this and the Civil War story, "The End of Hate". Both were sold at auction, Sotheby's New York, 4 Dec. 1996, the present two drafts as lot 88. The story was first published in book form in the posthumous collection Afternoon of an Author (1957). Bruccoli C266.

inscribed
When a book is described as being inscribed, it indicates that a short note written by the author or a previous owner has...[more]
leaves
Very generally, "leaves" refers to the pages of a book, as in the common phrase, "loose-leaf pages." A leaf is a single sheet...[more]
New
A new book is a book previously not circulated to a buyer. Although a new book is typically free of any faults or defects,...[more]