Home Argosy Book Store The History of the World, in Five Books...; Whereunto is… 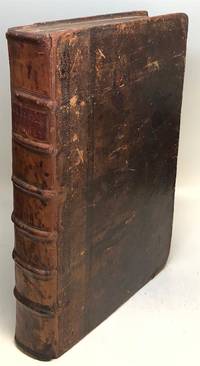 The History of the World, in Five Books...; Whereunto is added in this Edition, the Life and Tryal of the Author

The History of the World, in Five Books...; Whereunto is added in this Edition, the Life and Tryal of the Author

London: Tho. Basset, 1687. hardcover. very good(+). Complete with "The Mind of the Front" poem by Ben Jonson, frontispiece portrait and extra illustrated allegorical title; 8 double-page maps, and a few in-text woodcut charts throughout; decorative initials and headers for each of the 5 books; rubricated title. [4], xxxii, [24], 44, 813, [45] pages with text in double columns. Very thick folio, contemporary calf with some blind-stamped daetails, expertly re-backed in similar mottled calf with leather label (covers and edges scuffed and worn but sound). London: Tho. Basset, Ric. Chiswell, Benj. Tooke, Tho. Passenger, Geo. Dawes, Tho. Sawbridge, M. Wotton and G. Conyers, 1687. Early edition, the first to include the "Tryal." Minor staining at rear in the Chronology and Content sections, but generally a clean, tight copy. "Raleigh's labours, which began with the creation, only reached to 130 B.C., the date of the conversion of Macedonia into a Roman province. He traced the rise and fall of the three great empires of Babylon, Assyria, and Macedon, and dealt exhaustively with the most flourishing periods of Jewish, Greek, and Roman history." DNB XVI. Wing (STC) R168. Lowndes III, p. 2039.

All items are offered net, subject to prior sale. Returns accepted within 7 days of receipt--please contact us first. Payment by Visa , Mastercard & American Express. Appropriate sales tax will be added for all N.Y. State residents

We are a large retail store, with 6 floors of out-of-print and rare books, (including, Americana, modern first editions, history of medicine and science), antique maps and prints, autograph manuscripts, letters & signatures.

edges
The collective of the top, fore and bottom edges of the text block of the book, being that part of the edges of the pages of a...[more]
calf
Calf or calf hide is a common form of leather binding.  Calf binding is naturally a light brown but there are ways to treat...[more]
re-backed
Describes a book that has had the material covering the spine replaced or joints mended.
folio
A folio usually indicates a large book size of 15" in height or larger when used in the context of a book description....[more]
G
Good describes the average used and worn book that has all pages or leaves present. Any defects must be noted. (as defined...[more]
tight
Used to mean that the binding of a book has not been overly loosened by frequent use.

Are you enchanted by books clad in fine bindings? This is the gallery for you to peruse! Learn more about Bayntun, Rivière & Sons, and their combined work as Bayntun-Rivière.