Home > Fine Editions Ltd > The history of the heavens, considered according to the… 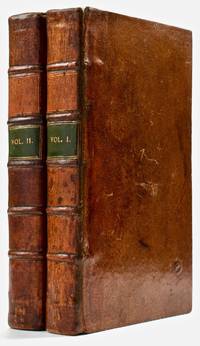 The history of the heavens, considered according to the notions of the poets and philosophers, compared with the doctrines of Moses [Provenance]

The history of the heavens, considered according to the notions of the poets and philosophers, compared with the doctrines of Moses [Provenance]

London: prinied [sic] for J. Osborn; and sold by C. Rivington, C. Davis, T. Longman, T. Astley, S. Austen [and 7 others in London, 1 in Bath], 1741. Second Edition. Full Calf. Fine. Translated from the French of the Abbé Pluche by J. B. de Freval, in two volumes. 8vo: [2],x,[2],288,[8]; [2],312,[8],92pp, with 25 engraved plates, captioned in French, cut (from original 12mo edition) and mounted. A note in Volume I requests the bookbinder "to paste the cuts (which are the original ones, engraven at Paris) upon an octavo leaf, the size of this work." Twelve of the plates are signed as engraved by J. P. Le Bas; the others are unsigned. Armorial book plate of William Constable, of Burton Constable Hall, to front paste down of each volume. English speckled calf, spines in compartments between raised bands, reddish-brown leather lettering pieces and green leather numbering pieces gilt, page edges speckled red, board edges decocted with gilt role. A spectacular set, with notable provenance, virtually flawless, with crisp, bright pages (save for offsetting to end papers), printed on heavy stock and tightly bound. Sale (Samuel Richardson) 266. Newton and Newtoniana 403.288. ESTC T105818. The second edition. "To which is added, a revisal of the work." First published, in Paris, in 1741, under the title Histoire du ciel. Noël-Antoine Pluche, a controversial professor of rhetoric at Rheims, published his most famous work, Spectacle de la nature, in nine volumes between 1732-1742. It was widely translated, making Pluche famous, but it was a work of popularization, not of science. Here, he attempts to make science conform with the teachings of Genesis. Burton Constable Hall is a substantial Elizabethan country house in East Yorkshire, with a fine 18th century cabinet of curiosities (apparently the most complete in any English country house), assembled by William Constable (1721-1791), probably the original owner of this set. Interesting, in 1760, soon after he may have acquired the set, Constable purchased the world's first equatorially mounted telescope from the famous York clock maker Henry Hindley. N. B. With few exceptions (always identified), we only stock books in exceptional condition. All orders are packaged with care and posted promptly. Satisfaction guaranteed. (Fine Editions Ltd is a member of the Independent Online Booksellers Association, and we subscribe to its codes of ethics.).

gilt
The decorative application of gold or gold coloring to a portion of a book on the spine, edges of the text block, or an inlay in...[more]
octavo
Another of the terms referring to page or book size, octavo refers to a standard printer's sheet folded four times, producing...[more]
calf
Calf or calf hide is a common form of leather binding.  Calf binding is naturally a light brown but there are ways to treat...[more]
crisp
A term often used to indicate a book's new-like condition. Indicates that the hinges are not loosened. A book described as crisp...[more]
12mo
A duodecimo is a book approximately 7 by 4.5 inches in size, or similar in size to a contemporary mass market paperback....[more]
fine
A book in fine condition exhibits no flaws. A fine condition book closely approaches As New condition, but may lack the...[more]
plate
Full page illustration or photograph. Plates are printed separately from the text of the book, and bound in at production. I.e.,...[more]
raised band(s)
Raised bands refer to the ridges that protrude slightly from the spine on leather bound books.  The bands are created...[more]
edges
The collective of the top, fore and bottom edges of the text block of the book, being that part of the edges of the pages of a...[more]

Home > Fine Editions Ltd > The history of the heavens, considered according to the…