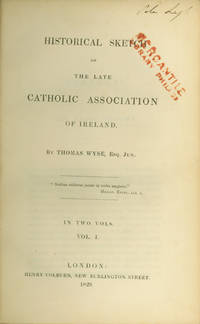 HISTORICAL SKETCH OF THE LATE CATHOLIC ASSOCIATION OF IRELAND

HISTORICAL SKETCH OF THE LATE CATHOLIC ASSOCIATION OF IRELAND

London: Henry Colburn, 1829. Two volumes. viii,435;vi,121,[1],cccxlvii,[5]pp. Octavo. Recent half calf and marbled boards. Occasional old stamps of a defunct mercantile library, some isolated spotting in upper margin of a few signatures in the second volume, otherwise a very good, crisp set. First edition of this important work by one intimately involved in the events it chronicles. The extensive appendices in the second volume contain a wealth of correspondence and transcripts of primary documents and records. "In 1825 the agitation for catholic emancipation revived in Ireland, and Wyse, returning with his family to Waterford, instantly took a leading part in politics. At the first great provincial meeting in Limerick, consisting of liberal protestants as well as catholics, he was unanimously elected chairman...Thenceforward in the struggle for emancipation Wyse ranked near O'Connell and Sheil. Lord O'Hagan states that of all the politicians of the day, Wyse was the most accomplished and highly cultured. When the Catholic Association, which Wyse's great- grandfather and the O'Conor Don first founded in 1760, decided on issuing an address to the people of England, he was chosen to compose it. He also originated a system of liberal clubs, but opposed exclusive dealing. He, too, was principally instrumental in getting up the great Rotunda meeting in 1828 to petition for emancipation... as soon as emancipation was granted, Wyse published 'A Letter to my Fellow Countrymen,' recommending the dissolution of the Catholic Association, since its object had been achieved and the country needed quiet. Immediately afterwards he published the 'Historical Sketch of the Catholic Association' " - DNB. Uncommon in commerce.

crisp
A term often used to indicate a book's new-like condition. Indicates that the hinges are not loosened. A book described as crisp...[more]
calf
Calf or calf hide is a common form of leather binding.  Calf binding is naturally a light brown but there are ways to treat...[more]
First Edition
In book collecting, the first edition is the earliest published form of a book. A book may have more than one first edition in...[more]
Marbled boards
...[more]
octavo
Another of the terms referring to page or book size, octavo refers to a standard printer's sheet folded four times, producing...[more]