Join us June 2–June 4, 2022 for our second virtual antiquarian book fair!
Preregister now for Biblio.live and get $10 to use at the fair.
home Evening Star Books Happenstance 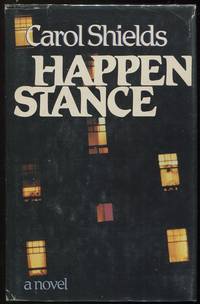 Toronto: McGraw-Hill Ryerson Limited [1980], 1980. First edition. Hardcover. Near Fine/Very Good. 8vo. [9], 2-216 pp. Black cloth with gold lettering on the spine. Price of $14.95 on front flap of jacket. Signed by author on title page. An attractive copy of Shields' third novel. A Near Fine book in a Very Good dust jacket with traces of edge wear.

Born in Oak Park, Illinois, in 1935, Carol Shields moved to Canada at the age of twenty-two, after studying at the University of Exeter in England, and then obtained her M.A. at the University of Ottawa. She started publishing poetry in her thirties, and wrote her first novel, Small Ceremonies , in 1976. Over the next three decades, Shields would become the author of over twenty books, including plays, poetry, essays, short fiction, novels, a book of criticism on Susanna Moodie and a biography of Jane Austen. Her work has been translated into twenty-two languages. In addition to her writing, Carol Shields worked as an academic, teaching at the University of Ottawa, the University of British Columbia and the University of Manitoba. In 1996, she became chancellor of the University of Winnipeg. She lived for fifteen years in Winnipeg and often used it as a backdrop to her fiction, perhaps most notably in Republic of Love . Shields also raised five children — a son and four daughters — with her husband Don, and often spoke of juggling early motherhood with her nascent writing career. When asked in one interview whether being a mother changed her as a writer, she replied, “Oh, completely. I couldn’t have been a novelist without being a mother. It gives you a unique witness point of the growth of personality. It was a kind of biological component for me that had to come first. And my children give me this other window on the world.” The Stone Diaries , her fictional biography of Daisy Goodwill, a woman who drifts through her life as child, wife, mother and widow, bewildered by her inability to understand any of these roles, received excellent reviews. The book won a Governor General’s Literary Award and a Pulitzer Prize, and was also shortlisted for the Booker Prize, bringing Shields an international following. Her novel Swann was made into a film (1996), as was The Republic of Love (2003; directed by Deepa Mehta). Larry’s Party , published in several countries and adapted into a musical stage play, won England’s Orange Prize, given to the best book by a woman writer in the English-speaking world. And Shields’s final novel, Unless , was shortlisted for the Booker, Orange and Giller prizes and the Governor General’s Literary Award, and won the Ethel Wilson Prize for Fiction. Shields’s novels are shrewdly observed portrayals of everyday life. Reviewers praised her for exploring such universal themes as loneliness and lost opportunities, though she also celebrated the beauty and small rewards that are so often central to our happiness yet missing from our fiction. In an eloquent afterword to Dropped Threads , Shields says her own experience taught her that life is not a mountain to be climbed, but more like a novel with a series of chapters. Carol Shields was always passionate about biography, both in her writing and her reading, and in 2001 she published a biography of Jane Austen. For Shields, Austen was among the greatest of novelists and served as a model: “Jane Austen has figured out the strategies of fiction for us and made them plain.” In 2002, Jane Austen won the coveted Charles Taylor Prize for Literary Non-fiction. A similar biographical impulse lay behind the two Dropped Threads anthologies Carol Shields edited with Marjorie Anderson; their contributors were encouraged to write about those experiences that women are normally not able to talk about. “Our feeling was that women are so busy protecting themselves and other people that they still feel they have to keep quiet about some subjects,” Shields explained in an interview. Shields spoke often of redeeming the lives of people by recording them in her own works, “especially that group of women who came between the two great women's movements…. I think those women’s lives were often thought of as worthless because they only kept house and played bridge. But I think they had value.” In 1998, Shields was diagnosed with breast cancer. Speaking on her illness, Shields once said, “It’s made me value time in a way that I suppose I hadn’t before. I’m spending my time listening, listening to what's going around, what's happening around me instead of trying to get it all down.” In 2000, Shields and her husband Don moved from Winnipeg to Victoria, where they lived until her passing on July 16, 2003, from complications of breast cancer, at age 68.

All items subject to prior sale.� Certain items and shipping to certain countries may exceed the standard shipping amounts.� Any shipping expenses incurred above the standard rate will be billed at cost. Payment is in US dollars.� Personal checks must clear prior to shipment (please allow 10 days).� Books may be returned within 15 calendar days of delivery for any reason, so long as we are notified of return within 10 days of delivery.� Return items must be well packaged and fully insured and must be returned in same condition as sold. Any book described as a First Edition is also a First Printing unless otherwise indicated.

Seller rating:
This seller has earned a 5 of 5 Stars rating from Biblio customers.
Biblio.co.uk member since 2007
Madison, Wisconsin
Ask Seller a Question

We buy and sell rare and fine books in many fields. Our interests include philosophy, modern first editions, and works of historical or intellectual interest. In addition to bookselling, we regularly do valuations and appraisals for non-IRS purposes. Evening Star Books is a Limited Liability Company.

First Edition
In book collecting, the first edition is the earliest published form of a book. A book may have more than one first edition in... [more]
Cloth
"Cloth-bound" generally refers to a hardcover book with cloth covering the outside of the book covers. The cloth is stretched... [more]
spine
The outer portion of a book which covers the actual binding. The spine usually faces outward when a book is placed on a shelf.... [more]
fine
A book in fine condition exhibits no flaws. A fine condition book closely approaches As New condition, but may lack the... [more]
jacket
Sometimes used as another term for dust jacket, a protective and often decorative wrapper, usually made of paper which wraps... [more]
title page
A page at the front of a book which may contain the title of the book, any subtitles, the authors, contributors, editors, the... [more]