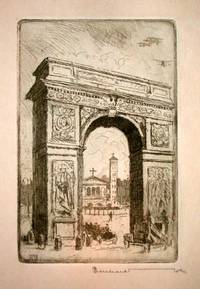 [ New York: Printed and Published by the Artist, 1920. Quarto. Original cloth tape backed boards, with etched vignette. Separation between front free endsheet and second endsheet due to the weight of the boards, some creasing to spine, but a very good copy, internally fine. Rear panel of dust jacket present. First edition thus, and one of Wall's least common and most desirable productions, consisting of twenty-two original etchings printed from zinc plates in various hues, with each of the plates signed by the artist in the margin, accompanied by the original etched preliminaries, title, index and colophon. Wall had originally intended the edition to consist of fifty copies, but the zinc plates did not hold up sufficiently for that many impressions, and he reduced the edition to twenty-six copies (so corrected on the colophon in ink, and signed by him). Two of the original etched zinc plates are inlaid into the inside of the boards, in this case those for two of the best of the images: "Washington Square Arch" and "A Studio." A typed transcript of some comments Wall made in 1937 about the edition is laid in, along with a 1948 cover letter from Dawson's Book Shop. Weber does not note the truncation of the edition, gives a variant plate count - perhaps including some of the etched prelims in his count, as this copy collates complete according to the index, plus the two self- portraits - and notes "many copies have a cancelled plate embedded in the cover." As noted above, this copy, #22, has two of the original zinc plates, and unlike Father Weber's copy, has the etching on the upper board imprinted in the board itself, rather than on a separate label. The descriptive text leaf describes this as the "third state" of the project, no doubt referring to the 1918 TEN ETCHINGS OF GREENWICH VILLAGE. WEBER, p.31.

New
A new book is a book previously not circulated to a buyer. Although a new book is typically free of any faults or defects,...[more]
vignette
A decorative design or illustration placed at the beginning or end of a ...[more]
colophon
The colophon contains information about a book's publisher, the typesetting, printer, and possibly even includes a printer's...[more]
plate
Full page illustration or photograph. Plates are printed separately from the text of the book, and bound in at production. I.e.,...[more]
Cloth
"Cloth-bound" generally refers to a hardcover book with cloth covering the outside of the book covers. The cloth is stretched...[more]
First Edition
In book collecting, the first edition is the earliest published form of a book. A book may have more than one first edition in...[more]
fine
A book in fine condition exhibits no flaws. A fine condition book closely approaches As New condition, but may lack the...[more]
jacket
Sometimes used as another term for dust jacket, a protective and often decorative wrapper, usually made of paper which wraps...[more]
quarto
The term quarto is used to describe a page or book size. A printed sheet is made with four pages of text on each side, and the...[more]
spine
The outer portion of a book which covers the actual binding. The spine usually faces outward when a book is placed on a shelf....[more]