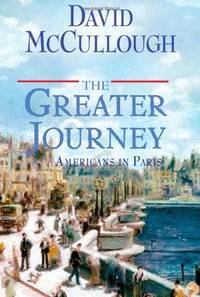 The Greater Journey: Americans in Paris

The Greater Journey: Americans in Paris

13 Copies Available from This Seller

(You can add more at checkout.)
Item Price:
US$6.47
FREE shipping to USA
More Shipping Options

Simon & Schuster. Used - Good. Shows some signs of wear, and may have some markings on the inside.

As David McCullough writes, âÈêNot all pioneers went west.âÈë In The Greater Journey , he tells the enthralling, inspiringâÈ'and until now, untoldâÈ'story of the adventurous American artists, writers, doctors, politicians, and others who set off for Paris in the years between 1830 and 1900, hungry to learn and to excel in their work. What they achieved would profoundly alter American history. Elizabeth Blackwell, the first female doctor in America, was one of this intrepid band. Another was Charles Sumner, whose encounters with black students at the Sorbonne inspired him to become the most powerful voice for abolition in the U.S. Senate. Friends James Fenimore Cooper and Samuel F. B. Morse worked unrelentingly every day in Paris, Morse not only painting what would be his masterpiece, but also bringing home his momentous idea for the telegraph. Harriet Beecher Stowe traveled to Paris to escape the controversy generated by her book, Uncle TomâÈçs Cabin . Three of the greatest American artists everâÈ'sculptor Augustus Saint-Gaudens, painters Mary Cassatt and John Singer SargentâÈ'flourished in Paris, inspired by French masters. Almost forgotten today, the heroic American ambassador Elihu Washburne bravely remained at his post through the Franco-Prussian War, the long Siege of Paris, and the nightmare of the Commune. His vivid diary account of the starvation and suffering endured by the people of Paris is published here for the first time. Telling their stories with power and intimacy, McCullough brings us into the lives of remarkable men and women who, in Saint-GaudensâÈç phrase, longed âÈêto soar into the blue.âÈë

Seller rating:
This seller has earned a 4 of 5 Stars rating from Biblio customers.
Biblio.co.uk member since: 2005
Mishawaka, Indiana
Ask Seller a Question