Home Textbooks A Game of Thrones: 1 (Song of Ice and Fire) - SIGNED 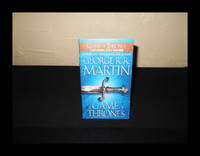 New York: Bantam USA, 2011. Soft cover. Near Fine. Near fine and appears unread, without dust jacket as issued. SIGNED by the author on the title page. A "Bantam Mass Market Edition", printing (edition) #38.

A Game of Thrones is the first of seven planned novels in A Song of Ice and Fire, an epic fantasy series by American author George R. R. Martin. It was first published in August 1996. The novel won the 1997 Locus Award, and was nominated for both the 1998 Nebula Award and the 1997 World Fantasy Award. The novella Blood of the Dragon , comprising the Daenerys Targaryen chapters from the novel, won the 1997 Hugo Award for Best Novella. In January 2011 the novel became a New York Times bestseller and reached #1 on the list in July 2011. A signed first edition in good condition can run from $1,500 to $3,500. The first five books of the seven book series have been published as of 2018: A GAME OF THRONES A CLASH OF KINGS A STORM OF SWORDS A FEAST OF CROWS A DANCE WITH DRAGONS The sixth book – the Winds of Winter, is still being written, but rumored to be released in 2018. “Winter is coming. Such is the stern motto of House Stark, the northernmost of the fiefdoms that owe allegiance to King Robert Baratheon in far-off King’s Landing. There Eddard Stark of Winterfell rules in Robert’s name. There his family dwells in peace and comfort: his proud wife, Catelyn; his sons Robb, Brandon, and Rickon; his daughters Sansa and Arya; and his bastard son, Jon Snow. Far to the north, behind the towering Wall, lie savage Wildings and worse—unnatural things relegated to myth during the centuries-long summer, but proving all too real and all too deadly in the turning of the season. Yet a more immediate threat lurks to the south, where Jon Arryn, the Hand of the King, has died under mysterious circumstances. Now Robert is riding north to Winterfell, bringing his queen, the lovely but cold Cersei, his son, the cruel, vainglorious Prince Joffrey, and the queen’s brothers Jaime and Tyrion of the powerful and wealthy House Lannister—the first a swordsman without equal, the second a dwarf whose stunted stature belies a brilliant mind. All are heading for Winterfell and a fateful encounter that will change the course of kingdoms. Meanwhile, across the Narrow Sea, Prince Viserys, heir of the fallen House Targaryen, which once ruled all of Westeros, schemes to reclaim the throne with an army of barbarian Dothraki—whose loyalty he will purchase in the only coin left to him: his beautiful yet innocent sister, Daenerys.” - from georgerrmartin.com

Read more: Identifying first editions of A Game of Thrones: 1 (Song of Ice and Fire) - SIGNED

Best fantasy book I have read in decades.

30 day return guarantee, with full refund including original shipping costs for up to 30 days after delivery for any reason.

Seller rating:
This seller has earned a 5 of 5 Stars rating from Biblio customers.
Biblio.co.uk member since: 2017
Palm Desert, California
Ask Seller a Question

fine
A book in fine condition exhibits no flaws. A fine condition book closely approaches As New condition, but may lack the...[more]
Mass Market
Mass market paperback books, or MMPBs, are printed for large audiences cheaply.  This means that they are smaller, usually...[more]
title page
A page at the front of a book which may contain the title of the book, any subtitles, the authors, contributors, editors, the...[more]
jacket
Sometimes used as another term for dust jacket, a protective and often decorative wrapper, usually made of paper which wraps...[more]