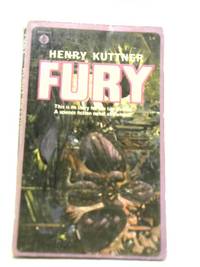 Under the roiling seas of Venus, under the deadly atmosphere are the Keeps, fully enclosed cities, and within them live the descendants of those survivors who used that atomic energy to propel the spaceships which first took them to Venus. In the massive superstructures that were built under the Venusian seas a complex feudal society devoted to decadence has evolved. Presiding over that society are the Immortals - genetic throwbacks to the mutant atomic survivors - who control the culture. This is a stable society but the stability will lead only to its destruction; the environment of Venus outside the Keeps is malevolent and it is encroaching. Into this society is born Sam Harker, the son of an Immortal whose human mother perishes in childbirth. The object of his father's hatred and disdain, Sam Harker is subjected to treatments which stunt his growth and render him hairless, then exiled from the society of Immortals to lead a tumultuous, rebel's life, one inspired by his hatred and desire for vengeance upon that society which exiled him. Sam wants revenge, he wants to destroy the society which has made him an outcast. His search for revenge and his great abilities make him more powerful than the decadent residents of the Keeps, even more powerful than the Immortals. As Sam becomes a politician appealing to the masses in his search for power, his campaign assaults the society itself that society becomes at risk. In the aftermath of destruction, the reclamation of human destiny becomes possible if humanity is forced to leave the Keeps.In unpublished correspondence with Sam Moskowitz in the l960's, in relation to Moskowitz's Seekers of Tomorrow, a collection of biographies of major science fiction writers, C.L. Moore wrote that Fury came about because John Campbell, the editor of Astounding, wanted a novel from the Kuttners and insisted upon its immediate delivery. The novel was scheduled and written so quickly Moore said, that the first part (of a three part serial) was in print before they had completed the final installment. The novel was half-written before the Kuttners themselves truly understood its plot and characters. Paradoxically, this urgency and improvisation led to a novel with great spontaneity, with high-wire intensity and unpredictability and Fury has been acclaimed as perhaps the only novel at the level of the great Kuttner and Moore short stories which dominated Astounding in the l940's. (Mutant, also published by Rosetta), is also highly regarded but that latter work was assembled from five self-standing novelettes spaced over a more considerable period.) The influence of Fury upon other writers is evident; much of the decadence of John Brunner's, Robert Silveberg's, Brian Aldiss's and Philip K.Dick's projected human societies in their fiction of the l960's was foreshadowed by the Kuttners.

Seller rating:
This seller has earned a 5 of 5 Stars rating from Biblio customers.
Biblio.co.uk member since: 2009
Goring-by-Sea, West Sussex
Ask Seller a Question

About World of Rare Books

World of Books sells rare and collectable books on behalf of charities. Our team of booksellers are happy to deal with any enquiries and aim to provide same-day dispatch for all orders.

text block
Most simply the inside pages of a book.  More precisely, the block of paper formed by the cut and stacked pages of a...[more]
acceptable
A non-traditional book condition description that generally refers to a book in readable condition, although no standard exists...[more]
rubbing
Abrasion or wear to the surface. Usually used in reference to a book's boards or dust-jacket.
edges
The collective of the top, fore and bottom edges of the text block of the book, being that part of the edges of the pages of a...[more]
chipping
A defect in which small pieces are missing from the edges; fraying or small pieces of paper missing the edge of a paperback, or...[more]