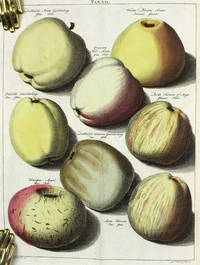 Amsterdam: Chez M. Magérus, Libraire, 1771. First Edition thus. Full Calf. Fine. Rare French Edition of the first compendium of fruit arboriculture with 39 folding copper-engraved plates in fine contemporary hand coloring. Two foolscap-folio volumes bound in one: [ii],160,[iv],161-205,[1], with 19 plates (quince, cherry, plum, fig, currant, almond, chestnut, apricot, and other fruits and nuts) and large woodcut tailpieces; [ii],339 [i.e. 139]pp, with 20 plates by Jacob Folkema and Jan Caspar Philips (showing 103 apple varieties and 82 varieties of pears, with such evocative name as red apple paradise, Queen of England, siren lemon, and Mrs. Thigh). Title and preface from the Leeuwarden edition of 1766 bound in between Rr2 and Ss. Elegantly bound in early mottled calf, spine richly gilt in seven compartments divided by raised bands, green morocco lettering piece gilt, edges stained red, plain period end papers. An excellent copy of a superb production, the only notable flaw being three plates and several quires, as well as end papers and fly leaves, evenly browned. Hunt 620. Nissen BBI 1077 and 1079. Landwehr (Dutch Books with Coloured Plates) 90 and 94. Bunyard, Guide to the Literature of Pomology, p. 439. Oak Spring Pomona, p. 131. Burnet III 681. ¶ Both titles often found bound together. First published at Leeuwarden, in Dutch, in 1758 (Nissen BBI 1077). Knoop was head gardener to the Dowager Princess of Orange at Marienburg and is considered, with Duhamel du Monceau, the father of pomology. Especially with the Pomologia, he broke new ground: Knoop was first to publish scientific explanations of apples and pears from Dutch, German, English and French regions. The book's many beautiful illustrations almost appear three-dimensional through the use of shadow effects. N. B. With few exceptions (always identified), we only stock books in exceptional condition. All orders are packaged with care and posted promptly. Satisfaction guaranteed.

fine
A book in fine condition exhibits no flaws. A fine condition book closely approaches As New condition, but may lack the...[more]
raised band(s)
Raised bands refer to the ridges that protrude slightly from the spine on leather bound books.  The bands are created...[more]
gilt
The decorative application of gold or gold coloring to a portion of a book on the spine, edges of the text block, or an inlay in...[more]
leaves
Very generally, "leaves" refers to the pages of a book, as in the common phrase, "loose-leaf pages." A leaf is a single sheet...[more]
morocco
Morocco is a style of leather book binding that is usually made with goatskin, as it is durable and easy to dye. (see also...[more]
spine
The outer portion of a book which covers the actual binding. The spine usually faces outward when a book is placed on a shelf....[more]
edges
The collective of the top, fore and bottom edges of the text block of the book, being that part of the edges of the pages of a...[more]
calf
Calf or calf hide is a common form of leather binding.  Calf binding is naturally a light brown but there are ways to treat...[more]
New
A new book is a book previously not circulated to a buyer. Although a new book is typically free of any faults or defects,...[more]
First Edition
In book collecting, the first edition is the earliest published form of a book. A book may have more than one first edition in...[more]