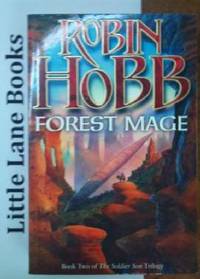 Harper Collins, 2006. The Soldier Son Trilogy is a fantasy novel series by Robin Hobb. Set in a new world unrelated to her previous trilogies, the Soldier Son Trilogy follows the life of Nevare Burvelle, the second son of a newly elevated Lord of the Kingdom of Gernia. The career of a person living in Gernia is heavily influenced by their parentage. Those sons born to common parentage follow their father's career. However, for the sons of a noble, things are different. The eldest son inherits his father's title, the second son serves as an officer in the army, the third son enters priesthood, while the fourth becomes an artist. This allocation continues for further sons. Daughters are relegated to submissive roles, being primarily used to forge social links with arranged marriages. The first book, Shaman's Crossing, concerns Nevare's education. As a young boy on the vast plains, his position as the second son, the Soldier Son, is cemented from birth. From an early age, Nevare is drilled in mounted cavalla (Cavalry) techniques, riding, survival, tactics, and all aspects of life as an officer in the King's Cavalla. As a young man, Nevare's education at the King's Cavalla Academy begins. Book two, Forest Mage, finds Nevare out on his own struggling to find his identity. The third and final book, Renegade's Magic, features the resolution to both his internal struggle and the struggle between the two people. Each of the three weigh750g+. Papeback. Very Good/None Issued. 23.5cm.

Forest Mage is a 2006 fantasy novel by Robin Hobb, the second in her Soldier Son Trilogy.

Sales will be processed the same day they are received and posted that day or the next working day. Books are posted or sent by courier service whichever is the most convenient for the buyer. Books received not in "described" condition will be refunded within 7 days of sale. Books are posted wrapped in bubblewrap and sent in padded bags or Express Post.