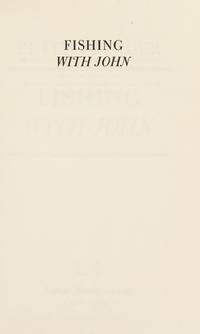 Farrar, Straus and Giroux 1988. 8vo hardcover 305pp. very good. / Very good d/w. From Publishers WeeklynA widely traveled reporter for the New Yorker , author of Inuit Journey and Denison's Ice Road , and former foreign correspondent and White House reporter, Iglauer met and married John Daly, a salmon fisherman, while working in Vancouver, B.C. She spent the next four years, until his death in 1978, aboard his 41-foot troller, the Morekelp. Daly was a Canadian eccentric, a man with a deep love of nature, dedicated to the sea. Iglauer's memoir of their life together is a moving appreciation of the precise, hard labor of fishermen, of stunning land- and seascapes along the Pacific coast, of a remarkable man. Time spent with him included listening to radio concerts, visits to old friends in isolated places, joining strikers on a seagoing picket line, savoring the minor pleasures of life. This superb book could be subtitled "A Study in Serenity." A portion of it previously appeared in the New Yorker. nCopyright 1988 Reed Business Information, Inc. nnFrom Library JournalnThis book of love, marriage, fishing, and the sea reflects the author's profound respect and affection for John Daly, the unusual man whom she married. It chronicles her four years with Daly, a small commercial salmon fisherman in British Columbia. As such, it has only fleeting relevance for salt or freshwater sports fishermen. Instead, the book appeals as a fine tribute to a man and a way of life that general readers interested in the outdoors will appreciate greatly. As companion and observer aboard the Morekelp , Iglauerauthor of four previous books and numerous magazine articlestook so thoroughly to her new circumstances that she continues to reside in Penders Harbour ten years after John's death. .

Return guarantee, with full refund including original shipping costs for up to 5 days after delivery if an item arrives misdescribed or damaged.

About Dial a Book

Large stock of second hand books on all subjects.

New
A new book is a book previously not circulated to a buyer. Although a new book is typically free of any faults or defects,...[more]
fine
A book in fine condition exhibits no flaws. A fine condition book closely approaches As New condition, but may lack the...[more]