Home > Textbooks > First into Nagasaki : The Censored Eyewitness Dispatches on Post-Atomic Japan and Its Prisoners of War 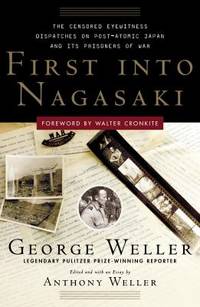 First into Nagasaki : The Censored Eyewitness Dispatches on Post-Atomic Japan and Its Prisoners of War

First into Nagasaki : The Censored Eyewitness Dispatches on Post-Atomic Japan and Its Prisoners of War

Crown Publishing Group, The, 2006. Hardcover. As New. Disclaimer:An apparently unread copy in perfect condition. Dust cover is intact; pages are clean and are not marred by notes or folds of any kind. At ThriftBooks, our motto is: Read More, Spend Less.Dust jacket quality is not guaranteed.

jacket
Sometimes used as another term for dust jacket, a protective and often decorative wrapper, usually made of paper which wraps...[more]
New
A new book is a book previously not circulated to a buyer. Although a new book is typically free of any faults or defects,...[more]

Home > Textbooks > First into Nagasaki : The Censored Eyewitness Dispatches on Post-Atomic Japan and Its Prisoners of War