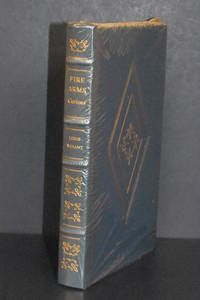 Fairfax, VA: Odysseus Editions/Natioinal Rifle Association, 1996 Odysseus Editions/Natioinal Rifle Association, Fairfax, VA. 1996. Hardcover. Reprint Edition of the 1955 original. Published for the National Rifle Association. Book is tight, square, and unmarked. Book Condition: New in publishers vinyl wrapping. No DJ. Green leather boards and spine with four raised spine ribs; gilt lettering on the spine; gilt textblock edges; moire endpapers; silk cloth page marker. 281 pp 8vo. This book is filled with pictures of more than 300 rare, strange and unusual guns, firearms and other weapons from the author's collection. The many strange and freakish gun fabrications that are shown in this book are a tribute to man's inventive energy as applied to the development of arms constructed to utilize the propelling force of gunpowder.There are pistols in knives and canes; pistols in flashlights, purses, plows, whips, bicycle handlebars, stirrups, keys, pipes, belts, sundials, and other contrivances. In addition there are other types classified as oddities, such as squeezers, knuckle-dusters, alarm and trap. There are combination weapons, turret, chain and harmonica pistols, guns using superposed loads and other variations from the norm. A clean pristine copy.

30 day return guarantee, with full refund including original shipping costs for up to 30 days after delivery if an item arrives misdescribed or in the unfortunate event, damaged. All books are packed and wrapped with care to avoid shifting during shipment and edge/tip strikes during the mailing process.

Seller rating:
This seller has earned a 5 of 5 Stars rating from Biblio customers.
Biblio.co.uk member since: 2018
WINFIELD, Kansas
Ask Seller a Question

About Walnut Valley Books/Books by White

Walnut Valley Books is a small independent home-based business with the bulk of my holdings being of an American military nature covering everything from the Revolutionary War to the current wars in Iraq and Afghanistan. I also have holdings of books on the Middle East, the southwestern United States (New Mexico especially, Kansas related titles, Oklahoma related titles, and other regionally specialized books. All of my holdings are hand-selected to be good quality books of interest to the reader, historian, or the collector. In addition to the above, you will also find a wide range of other topics such as Medical, US History, autobiographical, biographical, sports, women's studies, and many other eclectic topics.

spine
The outer portion of a book which covers the actual binding. The spine usually faces outward when a book is placed on a shelf....[more]
reprint
Any printing of a book which follows the original edition. By definition, a reprint is not a first edition.
tight
Used to mean that the binding of a book has not been overly loosened by frequent use.
gilt
The decorative application of gold or gold coloring to a portion of a book on the spine, edges of the text block, or an inlay in...[more]
New
A new book is a book previously not circulated to a buyer. Although a new book is typically free of any faults or defects,...[more]
Cloth
"Cloth-bound" generally refers to a hardcover book with cloth covering the outside of the book covers. The cloth is stretched...[more]

The Civil Rights Movement of the 1960's and '70's was an explosive time in American history, and it inspired explosive literature. From Malcolm X to Martin Luther King, Jr., browse some of the most collectible books from and about that era.