Home Dial a Book Final Warning: The Legacy of Chernobyl 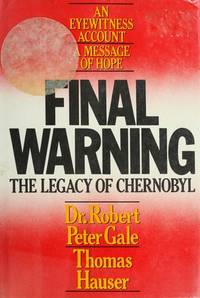 Final Warning: The Legacy of Chernobyl

Final Warning: The Legacy of Chernobyl

New York, NY Warner Books 1988. 8vo hardcover 230pp index. very good / very good d/w. From Publishers WeeklynGale is the UCLA physician who led the international medical team that treated victims of the Chernobyl nuclear meltdown. His first-person recreation of the rescue effort, told with an assist from Hauser (The Execution of Charles Horman), is disappointing. What might have been a moving account of heroism and tragedy is submerged in personal trivia and dull writing. There is little here that has not been covered in the news media, and the close-ups of Gorbachev, Shultz and Armand Hammer (who helped persuade the Soviets to accept medical relief) are of mild interest. The authors' recommendations include better training of nuclear personnel, a national program to respond to disasters in the U.S. and building nuclear plants away from dense population centers. Their proposed reforms are sketchy and anticlimactic. 100,000 first printing; $100,000 ad/promo; author tour. nCopyright 1988 Reed Business Information, Inc.nnFrom Library JournalnThe "final warning" consists of a last chapter of familiar exhortations against nuclear weapons and a brief discussion on the dangers of nuclear power plants. Nothing new. The heart of the book deals with Dr. Gale's experiences on his trip to the Soviet Union, in the aftermath of Chernobyl, to aid in bone marrow transplantation. Here are his personal accounts (aided by author Hauser) of wheedling an invitation through the efforts of Armand Hammer, and his preparations, his friendly reception in Moscow, his inspections of Chernobyl and Kiev, and his meeting with Gorbachev. Between interesting tidbits about accommodations, dining experiences, and press conferences, he gives fascinatingbut limitedinsights into Soviet medicine, in which politics is an important symptom. Though Gale wanders often from Chernobyl, his memoirs are interesting. Daniel LaRossa, Connetquot P.L., Bohemia, N.Y.nCopyright 1988 Reed Business Information, Inc. .

Return guarantee, with full refund including original shipping costs for up to 5 days after delivery if an item arrives misdescribed or damaged.

About Dial a Book

Large stock of second hand books on all subjects.