Home Dons Book Store Fear and Loathing in Las Vegas: A Savage Journey to the Heart of the American Dream 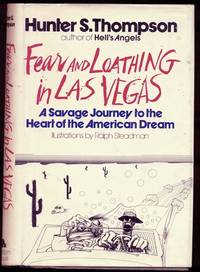 Fear and Loathing in Las Vegas: A Savage Journey to the Heart of the American Dream

Fear and Loathing in Las Vegas: A Savage Journey to the Heart of the American Dream

New York: Random House, 1972. 206 Pages. First Edition stated below number line 97532468 There is a hint of fading at the top and bottom of the gray boards. Otherwise this book is in Brand New condition. Dust jacket has been protected with Gaylord vlnyl covering and 5.95 flap price is unclipped. Heralded as the best book on the dope decade, Hunter Thompson's documented drug orgy through Las Vegas would no doubt leave Nancy Reagan blushing. Under the pseudonym of Raoul Duke, Thompson travels with his Samoan attorney, Dr. Gonzo, in a souped-up convertible dubbed the Great Red Shark. In the trunk, they hide two bags of grass, seventy-five pellets of mescaline, five sheets of high-powered blotter acid, a salt shaker half-full of cocaine and a whole galaxy of multicolored uppers, downers, and screamers. A quart of tequila, a quart of rum, a case of Budweiser and a pint of raw ether which they manage to consume during their short tour. On assignment from a sports magazine to cover the fabulous Mint 400--a free-for-all biker's race in the heart of the Nevada desert--the drug-a-delic duo stumbles through Vegas in hallucinatory hopes of finding the American dream. Two truck-stop waitresses tell them it's nearby, but can't remember if it's on the right or the left. They of course never get the story, but they do commit the only sins in Vegas: burning the locals, abusing the tourists, terrifying the help. For Thompson to remember and pen his experiences with such clarity and wit is nothing short of a miracle; an impressive feat no matter how one feels about the subject matter. This book is a pop-culture classic, an icon of an era past and a nugget of pure comedic genius. First appeared in Rolling Stone magazine, issue 95, November 11, 1971 and 96, November 25, 1971. Illustrations appeared in same issues.. First Edition Stated. Hard Back. As New/As New. Illus. by Steadman, Ralph - Drawings. 5 3/4" x 8 1/2".

Fear and Loathing in Las Vegas: A Savage Journey to the Heart of the American Dream is a novel by Hunter S. Thompson, illustrated by Ralph Steadman. The book is a roman à clef, rooted in autobiographical incidents. The story follows its protagonist, Raoul Duke, and his attorney, Dr. Gonzo, as they descend on Las Vegas to chase the American Dream through a drug-induced haze. The novel first appeared as a two-part series in Rolling Stone magazine in 1971, was printed as a book the same year, and was later adapted into a film of the same name in 1998 starring Johnny Depp and Benicio del Toro. According to The New York Times,  Fear and Loathing "cemented Mr. Thompson's place as a singular presence in American journalism or, as he once called himself, 'a connoisseur of edge work.'"

Read more: Identifying first editions of Fear and Loathing in Las Vegas: A Savage Journey to the Heart of the American Dream

We accept checks, money orders, Discover, MasterCard and Visa. Books may be returned for any reason providing a request is made within 7 days of receipt. Return shipping charges refunded if book is not as described.

Seller rating:
This seller has earned a 4 of 5 Stars rating from Biblio customers.
Biblio.co.uk member since: 2005
Albuquerque, New Mexico
Ask Seller a Question

We are a family owned and operated bookstore in same location for 49 years. We have built our business on integrity, professional and personal service. General line of new and used paperback and hardback books, comics and graphic novels.

number line
A series of numbers appearing on the copyright page of a book, where the lowest number generally indicates the printing of that...[more]
First Edition
In book collecting, the first edition is the earliest published form of a book. A book may have more than one first edition in...[more]
jacket
Sometimes used as another term for dust jacket, a protective and often decorative wrapper, usually made of paper which wraps...[more]