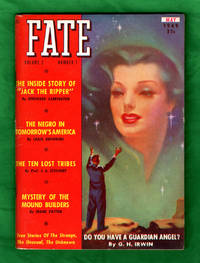 Evanston, IL: Clark Publishing Company, 1949 Evanston, IL: Clark Publishing Company, 1949. The May, 1949 issue of Fate Magazine (Volume 2, No.1) in Raymond A. Palmer's now-legendary paranormal-reporting non-fiction enterprise, which began with, in its first issue, Kenneth Arnold's cover account of flying crescents which "skipped like saucers across a pond", an event which, for whatever reason, kicked off the modern era of UFO events. After that, Fate introduced countless events which remain, to this day, fodder for paranormal documentaries and investigation. 12mo, illustrated staple-bound wraps, 96 pp. A very, very Near Fine example, just touched at back top of spine (scan), and just dots of micro-edgewearelsewher. See scans. Modest age-toning to the newsprint paper pages, which remain supple. In superb condition for a periodical which often shows substantial wear from use - especially one from its very early history, 1949. Cover art, uncredited, shows a very fetching Guardian Angel from one of the feature pieces, "Do You Have A Guardian Angle?" by G.H. Irwin. See the scanned image of the contents page for all of the other articles herein, which cover such topics as Jack the Ripper; Guardian Angels; The Ten Lost Tribes; Mystery of the Mound Builders; a Pennsylvania Hex Murder; a baffling San Diego Medium; Caravan of the Lost; Mysteries of the Cosmos; Sky Octopus; Vikings in America; and of course much, much else, including the standard Departments, always engrossing in themselves, all on various other paranormal or inexplicable phenomena. Interior art and photography is largely uncredited. A piece of paranormal history, and an example of a unique branch of Americana, in very highly collectible condition. Please see scans. l81

G
Good describes the average used and worn book that has all pages or leaves present. Any defects must be noted. (as defined...[more]
fine
A book in fine condition exhibits no flaws. A fine condition book closely approaches As New condition, but may lack the...[more]
spine
The outer portion of a book which covers the actual binding. The spine usually faces outward when a book is placed on a shelf....[more]
12mo
A duodecimo is a book approximately 7 by 4.5 inches in size, or similar in size to a contemporary mass market paperback....[more]