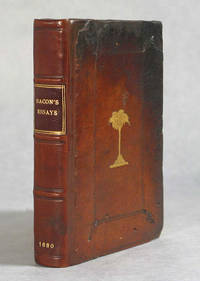 The Essays, Or Counsels, Civil And Moral, Of Sir Francis Bacon, Lord Verulam, Viscount St. Alban, With a Table of the Colours of Good & Evil, Whereunto Is added The Wisdom of the Antients, Enlarged by the Honourable Author Himself, and now more exactly Published

The Essays, Or Counsels, Civil And Moral, Of Sir Francis Bacon, Lord Verulam, Viscount St. Alban, With a Table of the Colours of Good & Evil, Whereunto Is added The Wisdom of the Antients, Enlarged by the Honourable Author Himself, and now more exactly Published

M. Clark for Samuel Mearne, in Little Britain, John Martyn, in St. Paul’s Church-yard, and Henry Herringman, in the New Exchange, London, 1680; 12mo; blank flyleaf, title page, A1-7, 1-222, 3 pg. index, Q1-9, blank, 1-28, blank, title page, I-X, 1-110, blank, 2 pg. index, page 111. The 1680 edition, with three additional essays: "A Fragment Of An Essay On Fame," "A Civic Character Of Julius Cesar," and "A Civic Character Of Augustus Cesar," thus increasing the total number to sixty-one, plus the two titled works "Of The Colours Of Good & Evil," and "The Wisdom Of The Antients" (Sir Arthur Gorges translation). Handsome British armorial binding, finely rebacked by Rene Patron of Hollywood, California in brown calf with genuine raised bands, morocco label, and gilt spine titles. Quill & ink inscription on front pastedown: "The gift of Clement Watson of New Zealand, ‘81." Engraved armorial bookplate on rear pastedown (on a mount a palm tree, fess in chief, crosses botonnée), with device reading "Jabez Watson, e Coll: Magd. Cantab." Jabez Watson (b. 1823 ) was the son of Benjamin Watson, Esq., of Wakefield in Yorkshire. He attended Magdalene College, Cambridge, taking his B.A. in 1848, and was ordained a deacon the same year. Upon earning his M.A. in 1851 he became an Anglican priest, and was Curate of St. Veep in Cornwall from 1853 to 1857, before converting to Catholicism. Palm tree crest impressed in gilt at center of front board. Name "Watson," written on the top and bottom page block edges. Crisp and bright, binding absolutely tight, sound, and square, text with some scattered minor dampstaining in the blank margins, and a chip in the blank margin of page 205, which does not intrude upon the text. A solid and desirable copy.

All first editions are also first printings unless otherwise stated. All items guaranteed. Domestic and international shipping rates shown are based on a weight of 2.2 lbs. For heavier items we may contact you to let you know that extra shipping is required. Provided we receive prior notice, books may be returned for any reason within 10 days of receipt for a full refund, including shipping, as long as they are in the same condition as when originally sent.

Seller rating:
This seller has earned a 5 of 5 Stars rating from Biblio customers.
Biblio.co.uk member since 2015
Van Nuys, California
Ask Seller a Question

raised band(s)
Raised bands refer to the ridges that protrude slightly from the spine on leather bound books.  The bands are created... [more]
rebacked
having had the material covering the spine replaced. ... [more]
calf
Calf or calf hide is a common form of leather binding.  Calf binding is naturally a light brown but there are ways to treat... [more]
title page
A page at the front of a book which may contain the title of the book, any subtitles, the authors, contributors, editors, the... [more]
spine
The outer portion of a book which covers the actual binding. The spine usually faces outward when a book is placed on a shelf.... [more]
gilt
The decorative application of gold or gold coloring to a portion of a book on the spine, edges of the text block, or an inlay in... [more]
New
A new book is a book previously not circulated to a buyer. Although a new book is typically free of any faults or defects,... [more]
crisp
A term often used to indicate a book's new-like condition. Indicates that the hinges are not loosened. A book described as crisp... [more]
bookplate
Highly sought after by some collectors, a book plate is an inscribed or decorative device that identifies the owner, or former... [more]
tight
Used to mean that the binding of a book has not been overly loosened by frequent use.
device
Especially for older books, a printer's device refers to an identifying mark, also sometimes called a printer's mark, on the... [more]
edges
The collective of the top, fore and bottom edges of the text block of the book, being that part of the edges of the pages of a... [more]