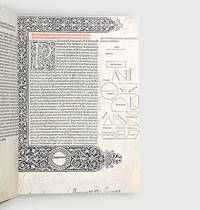 Elementa Geometriae.: [Translated from the Arabic by Adelard of Bath. Edited by Giovanni Campano.]

Venice: Erhard Ratdolt, , 1482. The oldest mathematical textbook still in common use today Chancery folio (285 x 204 mm), 137 unnumbered leaves, without the final blank. Modern vellum. Housed in custom brown crushed morocco solander box with titles in gilt to spine and brown cloth chemise. White-on-black woodcut border and red printed headline to first page of contents, white-on-black woodcut opening initials, geometric typemetal marginal diagrams throughout. Line 45 of o8r has the corrected setting of the text: "culi prostrati sed non sunt adinuicem equales. hoc aut scies si perpendiculares a" - cf. Curt M. Bühler, "A typographical error in the editio princeps of Euclid", 'Gb Jb' (1966), p. 102-104. Contemporary marginalia, profuse contemporary Latin annotations, mostly up to book V, including textual corrections, diagrams, calculations, formulas, and other remarks (a few cropped). A2r with partly effaced 16th-century inscription, and partly cropped 17th-century ink ownership inscription seemingly from the Dominican order of Perugia, Italy; bookseller's ticket (Philip C. Duschnes) to rear pastedown. Boards slightly bowed, washed and pressed, repairs to lower tip of first 11 leaves (a1-b1) and inner margin of a1, 7 woodcut diagrams slightly shaved, light worming to first and last few leaves just touching a few letters and diagrams, single small wormhole continuing through quire i, faint damp-staining to lower edge of last quire, bifolia m3.6 and m4.5 misbound. Still, a well-preserved, well-margined, and bright copy. First edition of "the oldest mathematical textbook still in common use today" (PMM) and one of the earliest printed books with geometrical figures. The text is the standard late mediaeval recension of Johannes Campanus of Novara, based on the 12th-century translation from the Arabic of Adelard of Bath. The text is preceded by a dedicatory letter by Erhard Ratdolt to Giovanni Mocenigo. Ratdolt's method of printing diagrams to illustrate a mathematical text and his finely printed astronomical books became the models for subsequent scientific publishing. Campanus's recension of the Elements, whose earliest witness is a manuscript dated 1259, became the standard version of the high and late Middle Ages. It was based on but enlarged from the translation from the Arabic made by Adelard of Bath about 120 years earlier, the so-called Adelard version II. Campanus's recension continued to be printed at least as late as 1558. Its textual history both in manuscript and print remains to be closely studied, and there is no modern edition. Books I-XIII are the Elementa proper; book XIV is the supplement of Hypsicles of Alexandria (second century BCE) and XV the supplement assigned to the school of Isidore of Miletos, architect of Hagia Sophia (sixth century CE). Goff, GW, and most of the other standard incunable literature have given to Campanus an apocryphal forename, Johannes. Ratdolt's Euclid was the first substantial mathematical work to be printed, and is one of his technically most advanced and accomplished productions. His dedication to the doge of Venice expresses his amazement that hitherto no major work of mathematics had been printed in Venice, the reason being the difficulty of supplying the diagrams without which much of mathematics, and especially geometry, can hardly be understood. He points out that, by his own invention, he has been able to remedy this, so that diagrams can now be printed "as easily as letters." These diagrams have traditionally been identified as woodcuts (BMC, GW), but it seems much more probable that they were in fact cast in typemetal. Euclid's Elements is the only writing of classical antiquity to have a continuous history of textbook use from the classical era to the 20th century. HC 66793*; GW 9428; Proctor 4383*; BMC V 285; PMM 25; Sander 2605; Goff E-113; ISTC ie00113000.

marginalia
Marginalia, in brief, are notes written in the margins, or beside the text of a book by a previous owner.  This is very...[more]
gilt
The decorative application of gold or gold coloring to a portion of a book on the spine, edges of the text block, or an inlay in...[more]
morocco
Morocco is a style of leather book binding that is usually made with goatskin, as it is durable and easy to dye. (see also...[more]
leaves
Very generally, "leaves" refers to the pages of a book, as in the common phrase, "loose-leaf pages." A leaf is a single sheet...[more]
vellum
Vellum is a sheet of specialty prepared skin of lamb, calf, or goat kid used for binding a book or for printing and writing. ...[more]
folio
A folio usually indicates a large book size of 15" in height or larger when used in the context of a book description....[more]
spine
The outer portion of a book which covers the actual binding. The spine usually faces outward when a book is placed on a shelf....[more]
Cloth
"Cloth-bound" generally refers to a hardcover book with cloth covering the outside of the book covers. The cloth is stretched...[more]
First Edition
In book collecting, the first edition is the earliest published form of a book. A book may have more than one first edition in...[more]