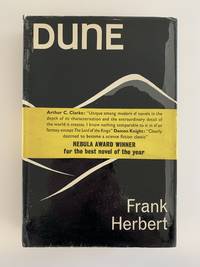 Dune - with the rare wrap-around band

Dune - with the rare wrap-around band

London: Gollancz, 1966. A first edition, first printing published by Gollancz in 1966. A near fine book without inscriptions. Titles a little faded. In a near fine unclipped wrapper. Laminate lifting a little to the fore-edge. Some wear to the spine tips. With the scarce yellow wrap-around band (repaired and a touch creased) with the quotation from Arthur C Clarke: "Unique among modern sf novels in the depth of its characterisation and the extraordinary detail of the world it creates. I know nothing comparable to it in sf or fantasy except The Lord of the Rings" [and from] Damon Knight: Clearly destined to become a science fiction classic. The band also announces: NEBULA AWARD WINNER for the best novel of the year. Rare with the band.

The first in the epic science fiction series of the same name, Dune is set on the desert planet Arrakis, host to "the Spice" - the most important resource in the universe, needed for interplanetary travel and coveted for its effects on longevity and granting incredible psychic powers among humans. Amidst an intergalactic power struggle, would-be heir to the planet's stewardship Paul Atreides is cast out into the desert to die following a coup. Joining a group of zealots called the Fremen, Paul soon becomes considered their messiah - Mahdi - and recognizes in them a formidable fighting force with whom he can retake control of Arrakis. Dune won both the Hugo Award for Best Novel and the Nebula Award for Best Novel.

Seller rating:
This seller has earned a 5 of 5 Stars rating from Biblio customers.
Biblio.co.uk member since:
Harrogate, North Yorkshire
Ask Seller a Question

fine
A book in fine condition exhibits no flaws. A fine condition book closely approaches As New condition, but may lack the...[more]
spine
The outer portion of a book which covers the actual binding. The spine usually faces outward when a book is placed on a shelf....[more]
First Edition
In book collecting, the first edition is the earliest published form of a book. A book may have more than one first edition in...[more]

George Psalmanazar played a grand prank in 1703, pretending to be a resident of the island of Formosa. His book took London by storm.  Learn more...