Join us June 2–June 4, 2022 for our second virtual antiquarian book fair!
Preregister now for Biblio.live and get $10 to use at the fair.
home rare books Travel and Exploration More Rare Books from The Book Collector ABAA, ILAB The Discovery of River Gambra (1623) 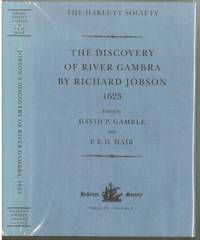 In 1623 Richard Jobson published an account of a 1620-1621 English voyage up River Gambia, during which a party, led by himself, penetrated to a point some 460 miles up river. The purpose of the voyage was to make contact with the gold trade of the West African interior, but in this there was little success. However, Jobson's account of the river, its commerce, natural history, peoples, religions, and politics, was the earliest to appear in print, in this fullness of detail, in any language. it was also the earliest detailed account of any part of Black Africa, by an Englishman. Although, in contemporary English, a probing of access to a new trade might be accounted a "discover", the voyage was only to a limited extent and "exploration". The English had been preceded in River Gambia by the Portuguese, who since the 1450s had voyaged and traded up-river, nearly as far as Jobson went. Part of Jobson's account therefore deals with the Portuguese - or rather Afro-Portuguese - presence. The English, trading in nearby Senegal only from the 1850s, penetrated River Gambia only from the 1580, penetrated Gambia only in 1618. Three English voyages, of 1618, 1619 and 1620-21 (the earlier ones evidenced in Jobosn's account) produced such heavy losses in men and money that an English presence in the river was not resumed until the 1650s. Portuguese accounts of the river existed in Jobson's day, but the major ones only in manuscript. Following the editors' Introduction, Part I of the present edition contains three Jobson texts: his book, the extracts from his "Jounrall" published by Purchas in1 1625, and an extant manuscript petition to the Crown. For comparison, Part II supplies translations of the earlier accounts of the river, by Portuguese or Portuguese agents. The Jobson material is extensively annotated. Jobson's account, almost entirely original, has special in its author's observations on the African scene, particularly those on the African peoples and individuals encountered. Jobson discusses such topics as local agriculture and trade, the role of Islam, political culture, and the position of women. Despite the limits of his experience, his observations are seemingly accurate and generally perceptive, as well as being (perhaps unexpectedly) often tolerant and even sympathetic.

Seller rating:
This seller has earned a 5 of 5 Stars rating from Biblio customers.
Biblio.co.uk member since 2005
Fort Worth, Texas
Ask Seller a Question

New
A new book is a book previously not circulated to a buyer. Although a new book is typically free of any faults or defects, "new"... [more]
spine
The outer portion of a book which covers the actual binding. The spine usually faces outward when a book is placed on a shelf.... [more]
quarto
The term quarto is used to describe a page or book size. A printed sheet is made with four pages of text on each side, and the... [more]
fine
A book in fine condition exhibits no flaws. A fine condition book closely approaches As New condition, but may lack the... [more]
gilt
The decorative application of gold or gold coloring to a portion of a book on the spine, edges of the text block, or an inlay in... [more]
Cloth
"Cloth-bound" generally refers to a hardcover book with cloth covering the outside of the book covers. The cloth is stretched... [more]
jacket
Sometimes used as another term for dust jacket, a protective and often decorative wrapper, usually made of paper which wraps... [more]
First Edition
In book collecting, the first edition is the earliest published form of a book. A book may have more than one first edition in... [more]