Home > Milestones of Science Books > The Descent of Man, and Selection in Relation to Sex. 2 volumes 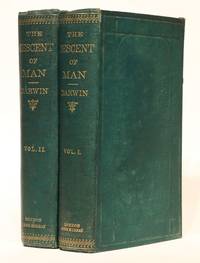 The Descent of Man, and Selection in Relation to Sex. 2 volumes

The Descent of Man, and Selection in Relation to Sex. 2 volumes

London: John Murray, 1871. 1st Edition. Hardcover. Very Good. 1st Edition. Hardcover. 8vo - over 7¾ - 9¾" tall. 8vo (189 x 129 mm). viii, 423 [1], 16; viii, [2], 475 [1], 16 pp., including half-titles, publisher's catalogue dated January 1871 at end of each volume, and several woodcut illustrations in text. Untrimmed and partially unopened. Original publishers green cloth (cloth little rubbed, spotted and soiled, corners bumped and frayed, slight wear to extremities), inner hinges cracked but holding. Internally very little age-toned, little foxing to endpapers, half-titles and adverts at end (else virtually unfoxed), short tear in blank fore-margin of vol. I, p.21/22. Provenance: Charles Robertson (inscribed on half-title and first flyleaf of vol. I). Still very good, unsophisticated set. ---- Freeman 245, Norman 599, Sparrow 48; Garrison-M. 170 - First edition, first issue of both volumes (with the errata on verso of title-leaf in vol. II and with the first word of p.297 "transmitted" in vol. I). Twelve years after the publication of the Origin, Darwin made good his promise to "throw light on the origin of man and his history" by publishing the present work, in which he compared man's physical and psychological traits to similar ones in apes and other animals, and showed how even man's mind and moral sense could have evolved through processes of natural selection. In discussing man's ancestry, Darwin did not claim that man was directly descended from apes as we know them today, but stated simply that the extinct ancestors of Homo sapiens would have to be classed among the primates. This statement was (and is) widely misinterpreted by the popular press, however, and caused a furor second only to that raised by the Origin. Darwin also added an essay on sexual selection, i.e. the preferential chances of mating that some individuals of one sex have over their rivals because of special characteristics, leading to the accentuation and transmission of those characteristics (Norman). 2500 copies of the first issue were published on February 24. The second issue was published the following month.

Prices include German VAT for shipments within Germany or to consumers inside the EU. Shipping costs depend on shipping destination and are added on the price.

**VAT-ID**
VAT-Identification number according to German law §27a Umsatzsteuergesetz:
DE272372101

Person, responsible for the content on this web site according to § 55 Abs. 2 RStV (German act):
Jörn Koblitz
Schulstrasse 18A
27721 Ritterhude, Germany

**Online Dispute Resolution (ODR):**
Online dispute resolution according to Article 14(1) ODR-VO: The European Commission provides a platform for settling oline disputes. It is accessible under: http://ec.europa.eu/consumers/odr/

Seller rating:
This seller has earned a 5 of 5 Stars rating from Biblio customers.
Biblio.co.uk member since:
Ritterhude
Ask Seller a Question

About Milestones of Science Books

Milestones of Science Books offers valuable and rare books and prints in the fields of Exact Science, Medicine and Natural History.

First Edition
In book collecting, the first edition is the earliest published form of a book. A book may have more than one first edition in...[more]
Cloth
"Cloth-bound" generally refers to a hardcover book with cloth covering the outside of the book covers. The cloth is stretched...[more]
verso
The page bound on the left side of a book, opposite to the recto page.
errata
Errata: aka Errata Slip A piece of paper either laid in to the book correcting errors found in the printed text after being...[more]
soiled
Generally refers to minor discoloration or staining.
cracked
In reference to a hinge or a book's binding, means that the glue which holds the opposing leaves has allowed them to separate,...[more]
unopened
A state in which all or some of the pages of a book have not been separated from the adjacent pages, caused by a traditional...[more]

Home > Milestones of Science Books > The Descent of Man, and Selection in Relation to Sex. 2 volumes