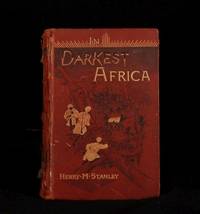 Condition
FAIR due to miss
Seller
Rooke Books
Seller rating:
This seller has earned a 5 of 5 Stars rating from Biblio customers.
BATH, Somerset

London - Sampson Low, Marston Low, Searle and Rivington, 1890 Book. FAIR due to miss. Hardcover. An account of the expedition to rescue Emin Pasha, the governor of Equatoria, by the famous Welsh explorer and journalist Sir Henry Morton Stanley. Sir Henry Morton Stanley, was famous for his exploration of Africa and his search for David Livingstone. Upon finding Livingstone, Stanley allegedly uttered the now-famous greeting, Dr. Livingstone, I presumeIn 1886, Stanley led the Emin Pasha Relief Expedition to rescue Emin Pasha, the governor of Equatoria in the southern Sudan. King Leopold II demanded that Stanley take the longer route, via the Congo river, hoping to acquire more territory and perhaps even Equatoria. After immense hardships and great loss of life, Stanley met Emin in 1888, charted the Ruwenzori Range and Lake Edward, and emerged from the interior with Emin and his surviving followers at the end of 1890. But this expedition tarnished Stanley's name because of the conduct of the other Europeans: British gentlemen and army officers. An army major was shot by a carrier, after behaving with extreme cruelty. James Jameson, heir to an Irish whiskey manufacturer, bought an eleven-year old girl and offered her to cannibals in order to document and sketch how she was cooked and eaten. Stanley only found out when Jameson had died of fever. Illustrated throughout with one hundred and fifty woodcut illustrations and maps, including a frontispiece photograph of the author, a folded map of Africa, and a facsimile of the author's signature. Condition: In decorative red cloth bindings with gilt detailing. Externally sound, with some wear to theboards and extremities, and particularly thebackstrip of volume I. Jointsof volume II have been reinforced. Internally, the hinges of volume I are tender, with some pages loose,but volume II is firmly bound. Pages 515-530 of volume I missing. The leaves are generally bright and clean, with some scattered light foxing. Overall: FAIR due to missing pages..

In Darkest Africa (1890) is Henry M. Stanley’s own account of his last adventure on the African continent. At the turn of that century, the interior of the African continent was largely unknown to the American and European public. With the accounts of great explorers like Stanley, readers became thrilled by stories African expeditions and longed to follow in the footsteps of these explorers. In 1888, Stanley led an expedition to come to the aid of Mehmed Emin Pasha. The two volumes that compose In Darkest Africa; or, The Quest, Rescue, and Retreat of Emin, Governor of Equatoria are his account of what happened.

Books are sent on approval and may be returned in like condition for any reason within 14 days of receipt. Responsibility of return to be with the purchaser.

Seller rating:
This seller has earned a 5 of 5 Stars rating from Biblio customers.
Biblio.co.uk member since: 2007
BATH, Somerset
Ask Seller a Question

Welcome to Rooke Books Antiquarian BooksellerWe are a small team dedicated to bringing you very scarce books at reasonable prices. We specialise in rare and hard to come by works on all subjects over the last 500 years, together with modern first editions and decorative sets and bindings. Our library has something for every interest and specialism. We deliver worldwide using a fully tracked and insured courier delivery service. Where are We?Based in the literary city of Bath, our offices are housed in the Eastern Dispensary. Built in 1845, the building originally existed as a charitable institution providing medical care.The building now houses our collection of over twenty thousand books and has five full time members of staff.

facsimile
An exact copy of an original work. In books, it refers to a copy or reproduction, as accurate as possible, of an original...[more]
Cloth
"Cloth-bound" generally refers to a hardcover book with cloth covering the outside of the book covers. The cloth is stretched...[more]
gilt
The decorative application of gold or gold coloring to a portion of a book on the spine, edges of the text block, or an inlay in...[more]
leaves
Very generally, "leaves" refers to the pages of a book, as in the common phrase, "loose-leaf pages." A leaf is a single sheet...[more]
Fair
is a worn book that has complete text pages (including those with maps or plates) but may lack endpapers, half-title, etc....[more]