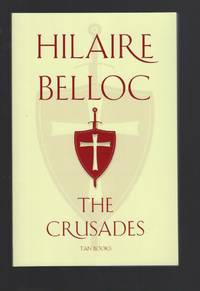 9 Copies Available from This Seller

T A N Books & Publishers, 1994. Paperback. New . The Crusades were essentially a conflict between Christendom and Islam. To be specific, they were a conflict between Christian civilization and Islam as adopted by "the Turk," those savage, destructive Mongol tribes from Asia. After the terrible Christian defeat at Manzikert in Turkey (1071 A.D., not only the ancient Christian civilization in the Holy Land, but Europe itself lay in mortal peril. Here the great Catholic historian Hilaire Belloc states that in this titanic struggle to which nearly a million men arose, "our fathers all but re-established the spiritual mastery of Europe over the East, all but recovered the full patrimony of Rome." But they did not recover it. They failed. That is, they failed after the success of the First or Great Crusade, which took Jerusalem in 1099 A.D. and then held out in the Holy Land for 50 years. But the disaster came at Hattin (1187 AD) and subsequent "Crusades" were but the rear guard of a defeat. In The Crusades, Belloc tells us why our Christian forefathers failed in this momentous enterprise. He explains the men, the leadership, the arms, the land, the finances, the motives, the character of the enemy, the heat, the thirst- to put us in a mind to understand why the Crusaders initially succeeded, why they ultimately failed, and why they went off on the Crusade in the first place. Hilaire Belloc predicts here (writing in 1937) that we have by no means seen the last of the results of the 12th Century Christian military failure against Islam. He states that "Islam has in the main preserved its soul, " and that therefore its material strength may return. On the other hand, Europe is disintegrating, for the Christian cement which held it together has crumbled. And in that great spiritual contrast, states Belloc, lies our great peril from Islam yet today. This is a new book.

All sales are final and payment must be made through credit cards, paypal, money orders, or checks. Payment is expected immediately for credit cards and paypal and within 7 days for money order and checks. Checks will need to clear before items ship. Items that have been paid with cleared payments will ship the next business day. Returns will be accepted on items received in the same conditon as shipped. Shipping fees will not be refunded unless there was an error on the sellers part.

Seller rating:
This seller has earned a 5 of 5 Stars rating from Biblio customers.
Biblio.co.uk member since 2008
Lynchburg, Virginia
Ask Seller a Question

More books like this are on sale from Keller Books at 20% off!