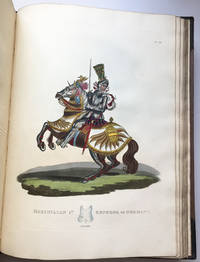 A Critical Inquiry into Antient Armour

A Critical Inquiry into Antient Armour: as it Existed in Europe, Particularly in Great Britain, from the Norman Conquest to the Reign of King Charles II.

Beautiful copy of the rare first edition of this standard work on medieval European armour.

With 80 fine illustrations drawn and engraved by Sir Samuel Rush Meyrick (some engraved by Richard Bridgens and William Maddocks).

The plates are essentially a catalogue of the collection of ancient armour collected by Samuel and his son Llewelyn, with a few items drawn from illuminated manuscripts or grave effigies. The armour includes chainmail suits worn by Norman invaders in the 11th century, knights in battlefield plate armour with heraldic armorial surcoats of the 12th to 13th century, crossbowmen, archers and pikemen of the 15th century, knights in ornately decorated and embossed jousting armour of the 16th century, and Royalist cavaliers of the 17th century.

Meyrick (1783-1848), was a lawyer, antiquary, historian and collector of arms and armor. In 1828, he built Goodrich Court, and exhibited his collection in a large armoury there. He was knighted in 1832 after helping to re-organize the armour collections at the Tower of London and Windsor Castle. Most of his collection is now in the Wallace Collection.

Bound in contemporary red half morocco with gilt tooling on spine, a.e.g., some staining and fading to cloth boards, original endpapers. Some finger smudges and dust to edges of text pages, but plates bright and clean with vivid hand-colour and gilt highlights. A few plates with slight oxidization.

Seller rating:
This seller has earned a 5 of 5 Stars rating from Biblio customers.
Biblio.co.uk member since 2019
Tokyo
Ask Seller a Question

First Edition
In book collecting, the first edition is the earliest published form of a book. A book may have more than one first edition in... [more]
plate
Full page illustration or photograph. Plates are printed separately from the text of the book, and bound in at production. I.e.,... [more]
fine
A book in fine condition exhibits no flaws. A fine condition book closely approaches As New condition, but may lack the... [more]
morocco
Morocco is a style of leather book binding that is usually made with goatskin, as it is durable and easy to dye. (see also... [more]
gilt
The decorative application of gold or gold coloring to a portion of a book on the spine, edges of the text block, or an inlay in... [more]
spine
The outer portion of a book which covers the actual binding. The spine usually faces outward when a book is placed on a shelf.... [more]
Cloth
"Cloth-bound" generally refers to a hardcover book with cloth covering the outside of the book covers. The cloth is stretched... [more]
edges
The collective of the top, fore and bottom edges of the text block of the book, being that part of the edges of the pages of a... [more]