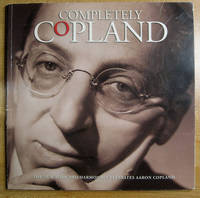 New York: New York Philharmonic, 1999. 47 pp. Wraps are rubbed at edges, inside fine. Many wonderful pictures of Copland and others. Contents: Carlos Moseley: Fanfare for the Uncommon Man, Chairman Emeritus, former Managing Director and President of the New York Philharmonic, salutes Aaron Copland; Michael Steinberg: The Voice of America, Aaron Copland didn't just define American music in this century--in many ways he embodied it; Copland: 100 Years: A timeline tracing the history of Copland's connection to the philharmonic, compiled by the staff of the New York Philharmonic Archives; Vivian Perlis: The Man Behind the Music: We all know the music--but what of the spirit behind the scores; Leonard Bernstein: ''Aaron and Moses'': Leonard Bernstein and Aaron Copland shared a friendship that began in 1937 and ran through the rest of their lives. In 1975, to mark Copland's 75th birthday, Bernstein wrote an appreciation of his friend and colleague; Completely Copland: A complete listing of all the Completely Copland events--concerts, discussions, lectures, screenings, and more; On Copland: Quotes from the people who knew the composer and from performers in the Completely Copland celebration appear throughout, complied and edited by Robert Sherman, including Kurt Masur, Deborah Borda, Marilyn Horne, William Warfield, Thomas Stacy, Stanley Drucker, Andre Previn, Marin Alsop, Leo Smit, Ned Rorem, Michael Borikin, Verna Fine, Peter G. Davis, David Diamond, Garrick Ohlsson, David Raksin, and Leslie B. Dunner. Wonderful illustrations in addition to many photos of the composer include Kostelanetz's score for A Lincoln Portrait, signed not only by Copland, but several people who narrated: Carl Sandburg, Mayor John Linsay, Marian Anderson, E. G. Marshall, and Walter Cronkite, and a Hirschfeld portrait. . Wraps. Very Good. 8vo - over 7¾" - 9¾" tall.

Veery Books’ specialties: (1) Music scores (Symphonic, Chamber, Choral, and Solo repertoire, Full conductor’s scores and study scores and parts throughout the range of classical music, including rare or first editions), bibliographies, histories, biographies, auction catalogs, literature and ephemera related to classical music and classical composers and musicians. (2) American popular music from the early 19th century to the 1940s. (3) Poetry and literature with emphasis on American poetry and fiction. (4) Rare and unusual American imprints from the 19th century. (5) Bibliographies, Bookseller’s catalogs, Auction catalogs for books, manuscripts, ephemera, prints, and art. Veery Books strives to provide accurate bibliographic and condition descriptions including photographs for each offering and where possible to offer quotations or unusual facts about the offering. Veery Books will be happy to assist you in your book search and welcomes inquiries regarding thousands of yet uncatalogued musical scores, bookseller’s and auction catalogs.

edges
The collective of the top, fore and bottom edges of the text block of the book, being that part of the edges of the pages of a...[more]
G
Good describes the average used and worn book that has all pages or leaves present. Any defects must be noted. (as defined...[more]
fine
A book in fine condition exhibits no flaws. A fine condition book closely approaches As New condition, but may lack the...[more]