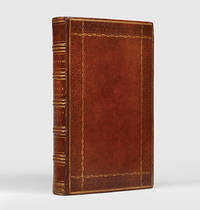 Comedies, Histories and Tragedies.: Published according to the true Original Copies. Unto which is added, Seven Plays, Never before Printed in Folio

London: for H. Herringman, E. Brewster, and R. Bentley,, 1685. The Fourth Folio, a tall copy in handsome diced russia Folio (369 x 234 mm). Late 18th-century diced russia, spine divided in six compartments by double raised bands, gilt-lettered direct in second, third and fourth compartments, first, fifth and sixth with central ornament in blind; sides with wide borders of a thick-and-thin rule in gilt enclosing a blind roll of leaves and acorns and a gilt wavy roll incorporating leaf sprays, gilt acorn roll to turn-ins and leather inner hinge, drab endpapers, gilt edges; the binding unsigned but quality work. Housed in a brown quarter morocco fleeced-line folding case by Sangorski & Sutcliffe. Engraved portrait by Martin Droeshout above the verses To the Reader on verso of the first leaf, title with fleur-de-lis device (McKerrow 263), double column text within typographical rules, woodcut initials. Engraved bookplate of T. Allen, FSA. Small wormhole(s) in lower inner margin, from beginning through to quire Uu and the extreme lower outer of corner of leaf Hhh5 to end, never touching text area; small hole in title leaf neatly repaired, not touching letters, consequent to a bookplate being sometime removed from the verso; small spill-burns in F3, Dd5,6, Eee1, Ttt5, and Vvv4 affecting the odd word or letter; a few letters marked by a contemporary hand on Bb6r; paper flaw in outer margin of *Ddd5, Ttt5 not affecting text; occasional faint browning; the odd isolated rust mark; notwithstanding these relatively trivial flaws, an exceptionally good unsophisticated copy. A notably tall and handsome copy of the Fourth Folio, the last of the 17th-century editions of Shakespeare's works, and the most grandly produced. The 1623 first folio was edited by John Heminge (d. 1630) and Henry Condell (d. 1627), and seven plays were added by Philip Chetwin (d. 1680) for the third folio of 1663, of which only one, Pericles, is today recognized as the work of Shakespeare. This fourth folio was a straight reprint of the third, and was issued by Henry Herringman in conjunction with other booksellers, with three settings of the title-page. In common with the Third, the Fourth Folio dropped the final "e" from Shakespeare's name, a spelling that persisted until the beginning of the 19th century. The most immediately striking aspect of the Fourth Folio is its height: Herringman and his co-publishers used a larger paper size to increase the number of lines per page and decrease the bulk of the book. Although this is the only edition in which each play does not start on a fresh page, it is in a larger font and more liberally spaced than the three earlier editions. (The two pages of L1 are set in smaller type, presumably after the discovery that some text had been omitted.) The printer of the Comedies has been identified from the ornaments as Robert Roberts. The Fourth Folio remained the favoured edition among collectors until the mid-18th century, when Samuel Johnson and Edward Capell argued for the primacy of the First Folio text. Bartlett 123; Gregg III, p. 1119; Jaggard p. 497; Pforzheimer 910; Wing S-2915.

gilt
The decorative application of gold or gold coloring to a portion of a book on the spine, edges of the text block, or an inlay in...[more]
hinge
The portion of the book closest to the spine that allows the book to be opened and closed.
device
Especially for older books, a printer's device refers to an identifying mark, also sometimes called a printer's mark, on the...[more]
folio
A folio usually indicates a large book size of 15" in height or larger when used in the context of a book description....[more]
spine
The outer portion of a book which covers the actual binding. The spine usually faces outward when a book is placed on a shelf....[more]
leaves
Very generally, "leaves" refers to the pages of a book, as in the common phrase, "loose-leaf pages." A leaf is a single sheet...[more]
reprint
Any printing of a book which follows the original edition. By definition, a reprint is not a first edition.
verso
The page bound on the left side of a book, opposite to the recto page.
morocco
Morocco is a style of leather book binding that is usually made with goatskin, as it is durable and easy to dye. (see also...[more]
bookplate
Highly sought after by some collectors, a book plate is an inscribed or decorative device that identifies the owner, or former...[more]
raised band(s)
Raised bands refer to the ridges that protrude slightly from the spine on leather bound books.  The bands are created...[more]