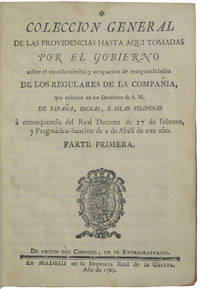 Madrid: En la Imprenta Real de la Gazeta, 1784. First edition. Contemporary mottled calf, compartments decorated in gilt, red morocco spine label titled in gilt, sewn in green silk ribbon, marbled endpapers. A very good copy, head band worn with a small chip and a tiny split at the joint, owner's bookplate and booksellers engraved plate on front pastedown, contents quite bright and clean.. 104, 91, 135, 144, [4], 74 pp. 4to. Five volumes bound in one. Parts 1, 2, 3 set in condensed type; parts 4 and 5 in expanded type. Royal decrees from Charles III and instructions, decisions, and regulations issued by the Consejo en el Extraordinario and its president, the Conde de Aranda (and others)--concerning the expulsion of the Jesuits. "These collections contain the documents relative to the expulsion of the Jesuits from the Spanish dominions, and the confiscation of their property, including the names of the colleges and houses of the order, the application of the confiscated property, &c. A complete series consists of five parts, which are rarely found together.... Our collation is of parts I. to III. only," Sabin 14304. Part 4 (p. 75-127) contains the papal brief "Dominus ac Redemptor" by Clement XIV, in Latin and Spanish. Earlier versions containing parts or all of the first three sections are not all that uncommon, but those containing all five parts remain relatively rare. Other than this copy, only two others have appeared in the auction records of ABPC and RBH since 1953, the first at the John B. Stetson sale at Parke Bernet, and the second, at Bonhams, in a modern binding and dampstained. Palau 56516. See Sabin 14304. Medina BHA: IV, 4228.

bookplate
Highly sought after by some collectors, a book plate is an inscribed or decorative device that identifies the owner, or former...[more]
gilt
The decorative application of gold or gold coloring to a portion of a book on the spine, edges of the text block, or an inlay in...[more]
calf
Calf or calf hide is a common form of leather binding.  Calf binding is naturally a light brown but there are ways to treat...[more]
morocco
Morocco is a style of leather book binding that is usually made with goatskin, as it is durable and easy to dye. (see also...[more]
First Edition
In book collecting, the first edition is the earliest published form of a book. A book may have more than one first edition in...[more]
spine label
The paper or leather descriptive tag attached to the spine of the book, most commonly providing the title and author of the...[more]
plate
Full page illustration or photograph. Plates are printed separately from the text of the book, and bound in at production. I.e.,...[more]