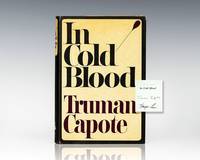 New York: Random House, 1965. First edition of Capote's landmark true-crime novel. Octavo, original cloth. Signed by both Truman Capote and Harper Lee on the half-title page. Truman Capote's friendship with Harper Lee began in the summer of 1929 when the two became next door neighbors in Monroeville, Alabama; both were the age of five. They shared a love of reading and began collaborating when Lee was gifted a typewriter by her father as a child. Lee drew on their friendship as inspiration for the characters Lee and Scout in her masterpiece To Kill A Mockingbird; Capote based his tomboy character Idabel Thompkins in his first novel Other Voices, Other Rooms on Lee. They worked together on Capote's true crime novel, In Cold Blood; Lee acted as his 'assistant reasearchist' and edited the final draft of the book. Upon its publication in 1965, Capote failed to acknowledge Lee's contributions to the book, after which their relationship was never the same. Fine in a near fine dust jacket with a touch of shelfwear. Jacket design by S. Neil Fujita. An exceptional association copy.       "Until one morning in mid-November of 1959, few Americans--in fact, few Kansans--had ever heard of Holcomb. Like the waters of the river, like the motorists on the highway, and like the yellow trains streaking down the Santa Fe tracks, drama, in the shape of exceptional happenings, had never stopped there." If all Truman Capote did was invent a new genre--journalism written with the language and structure of literature--this "nonfiction novel" about the brutal slaying of the Clutter family by two would-be robbers would be remembered as a trail-blazing experiment that has influenced countless writers. But Capote achieved more than that. He wrote a true masterpiece of creative nonfiction. In Cold Blood established Capote as the "herald of a new genre, ‘the non-fiction novel,’ which recognizes the convergence of fiction and fact in times of outrage, the insane surrealism of daily life" (Hart, 122; Allen, 247). "The best documentary account of an American crime ever written. . . . The book chills the blood and exercises the intelligence . . . harrowing" (The New York Review of Books). The book was adapted into a film of the same name 1967 and again in 2005 as the biographical portrait, Capote, starring Philip Seymour Hoffman, who won the Academy Award for Best Actor for his outstanding performance.

In Cold Blood is a 1966 book by American author Truman Capote. The book details the brutal 1959 murders of Herbert Clutter, a wealthy farmer from Holcomb, Kansas, and his wife and two of their children. When Capote learned of the quadruple murder before the killers were captured, he decided to travel to Kansas and write about the crime.

octavo
Another of the terms referring to page or book size, octavo refers to a standard printer's sheet folded four times, producing...[more]
Cloth
"Cloth-bound" generally refers to a hardcover book with cloth covering the outside of the book covers. The cloth is stretched...[more]
First Edition
In book collecting, the first edition is the earliest published form of a book. A book may have more than one first edition in...[more]
jacket
Sometimes used as another term for dust jacket, a protective and often decorative wrapper, usually made of paper which wraps...[more]
Association copy
An association copy is a copy of a book which has been signed and inscribed by the author for a personal friend,...[more]
shelfwear
Minor wear resulting from a book being place on, and taken from a bookshelf, especially along the bottom edge.
fine
A book in fine condition exhibits no flaws. A fine condition book closely approaches As New condition, but may lack the...[more]