Home The Book Collector ABAA, ILAB The Clicking of Cuthbert 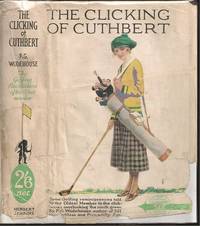 The Clicking of Cuthbert

The Clicking of Cuthbert

Condition
About very good/Fair
Seller
The Book Collector ABAA, ILAB
Seller rating:
This seller has earned a 5 of 5 Stars rating from Biblio customers.
Fort Worth, Texas

Listing through Ukridge to frontispiece, published in 1924. Jacket with 2'6" listed to spine.

The Clicking of Cuthbert is a collection of ten short stories by P. G. Wodehouse, all with a golfing theme. It was first published in the United Kingdom on 3 February 1922 by Herbert Jenkins Ltd of London. It was later published in the United States by George H. Doran of New York on 28 May 1924 under the title Golf Without Tears. The short stories were originally published in magazines between 1921 and 1922, in the UK Strand, October 1921 (as "The Unexpected Clicking of Cuthbert") and in the U S Elk's Magazine, July 1922 (as "Cuthbert Unexpectedly Clicks"). There are some slight differences between the two editions, chiefly as regards the names of characters, places, and famous golfers, which were adapted to suit the country of publication. As with most of the stories in the collection, the UK version of the story is set in England, while the US version is set in the United States. The first story in the collection introduces the Oldest Member, a repeat Wodehouse character, who narrates all but the last story.

Seller rating:
This seller has earned a 5 of 5 Stars rating from Biblio customers.
Biblio.co.uk member since: 2005
Fort Worth, Texas
Ask Seller a Question

inscribed
When a book is described as being inscribed, it indicates that a short note written by the author or a previous owner has...[more]
text block
Most simply the inside pages of a book.  More precisely, the block of paper formed by the cut and stacked pages of a...[more]
G
Good describes the average used and worn book that has all pages or leaves present. Any defects must be noted. (as defined...[more]
edges
The collective of the top, fore and bottom edges of the text block of the book, being that part of the edges of the pages of a...[more]
octavo
Another of the terms referring to page or book size, octavo refers to a standard printer's sheet folded four times, producing...[more]
soiled
Generally refers to minor discoloration or staining.
verso
The page bound on the left side of a book, opposite to the recto page.
spine
The outer portion of a book which covers the actual binding. The spine usually faces outward when a book is placed on a shelf....[more]
Fair
is a worn book that has complete text pages (including those with maps or plates) but may lack endpapers, half-title, etc....[more]
sunned
Damage done to a book cover or dust jacket caused by exposure to direct sunlight.  Very strong fluorescent light can cause...[more]
New
A new book is a book previously not circulated to a buyer. Although a new book is typically free of any faults or defects,...[more]
jacket
Sometimes used as another term for dust jacket, a protective and often decorative wrapper, usually made of paper which wraps...[more]