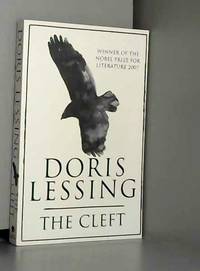 HarperPerennial, 2008. Paperback. Good. Slightly creased cover. Ammareal gives back up to 15% of this book's net price to charity organizations.

Doris Lessing, one of England's finest living novelists, invites us to imagine a mythical society free from sexual intrigue, free from jealousy, free from petty rivalries: a society free from men.An old Roman senator, contemplative at his late stage of life, embarks on what will likely be his last endeavour: the retelling of the story of human creation. He recounts the history of the Clefts, an ancient community of women living in an Edenic, coastal wilderness, confined within the valley of an overshadowing mountain. The Clefts have no need, or knowledge, of men – childbirth is controlled, like the tides that lap around their feet, through the cycles of the moon, and their children are always female. But with the unheralded birth of a strange, new child – a boy – the harmony of their community is suddenly thrown into jeopardy. At first, in their ignorance, the Clefts are awestruck by this seemingly malformed child, but as more and more of these threateningly unfamiliar males appear, now unfavourably nicknamed Squirts, they are rejected, and are exposed on the nearby mountainside; sacrificed to the patrolling eagles overhead, the sentinels of their female haven. Unbeknownst to the Clefts, however, these baby males survive, aided by the very eagles sent to kill them, and thrive on their own on the other side of the mountain. It is not until an unusually curious young Cleft named Maire goes beyond the geographical, and emotional, divide of the mountain that this disquieting fact is uncovered – a discovery that forces the Clefts to accept and realign themselves to the prospect of a now shared world, and the possible vengeance of the wronged males. In this fascinating and beguiling novel, Lessing confronts head-on the themes that inspired much of her early writing: how men and women, two similar and yet thoroughly distinct creatures, manage to live side by side in the world, and how the specifics of gender affect every aspect of our existence.

Seller rating:
This seller has earned a 5 of 5 Stars rating from Biblio customers.
Biblio.co.uk member since 2020
Grigny
Ask Seller a Question

Ammareal is a professional bookseller specialized in used books. We ship worldwide. We have more than 500 000 books in stock, including a large number of technical and university-level books. We give back up to 15% of the price of each book to charities, libraries and organizations fighting in favor of literacy. What we do not sell, we give ; what we do not give, we recycle.