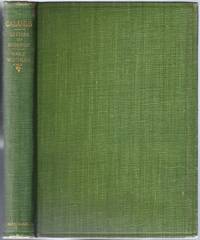 Calamus. A series of letters written during the years 1868-1880 by Walt Whitman to a young friend (Peter Doyle)

Calamus. A series of letters written during the years 1868-1880 by Walt Whitman to a young friend (Peter Doyle)

Boston: Laurens Maynard, 1897. First Edition. Cloth. Fine-. First American Issue of the only edition, with spine imprint Maynard and title page "Published by Laurens Maynard" (later Small, Maynard). Edited, with an introduction, by Richard Maurice Bucke, M.D., one of Whitman's literary executors. Small 8vo: viii,173pp, with two inserted leaves of Japan paper, one (frontispiece) with drawing by H. D. Young of Whitman and Peter Doyle on verso before title page, the other a photograph of a letter on recto after p. 112. Publisher's lime T-like cloth (bold ribbed), cover blind stamped with single rule frame, spine lettered in gilt. Pages marginally toned, frontispiece and facsimile letter browned, else an excellent example. BAL 21446. Meyerson A14.I.b1. In the third edition of Leaves of Grass, published in 1860, Whitman's "Calamus" poems, a cluster devoted to male-male affection, make their first appearance (the edition on offer here is the first, 37 years later, in which the poems stand alone). The Calamus poems offer a vision of men loving men to counter the Civil War horror of fratricide that threatened the nation at a pivotal moment in its history. Their genesis is found in an unpublished manuscript sequence of twelve poems entitled "Live Oak With Moss," written in or before the spring of 1859. The poems seem to recount the story of a relationship between the speaker and a male lover. In the third edition of Leaves, Whitman included the twelve "Live Oak" poems along with others to form a sequence of 45 untitled poems that celebrate many aspects of "comradeship" or "adhesive love," Whitman's term, borrowed from phrenology, to describe male same-sex attraction in its political, spiritual, metaphysical, and personal phases-in Whitman's view, the backbone of future nations, the root of religious sentiments, the solution to the big questions of life, and a source of personal anguish and joy. N. B. With few exceptions (always identified), we only stock books in exceptional condition, with dust jackets carefully preserved in archival, removable polypropylene sleeves. All orders are packaged with care and posted promptly. Satisfaction guaranteed.

leaves
Very generally, "leaves" refers to the pages of a book, as in the common phrase, "loose-leaf pages." A leaf is a single sheet...[more]
Cloth
"Cloth-bound" generally refers to a hardcover book with cloth covering the outside of the book covers. The cloth is stretched...[more]
BAL
Bibliography of American Literature (commonly abbreviated as BAL in descriptions) is the quintessential reference work for any...[more]
verso
The page bound on the left side of a book, opposite to the recto page.
spine
The outer portion of a book which covers the actual binding. The spine usually faces outward when a book is placed on a shelf....[more]
recto
The page on the right side of a book, with the term Verso used to describe the page on the left side.
title page
A page at the front of a book which may contain the title of the book, any subtitles, the authors, contributors, editors, the...[more]
First Edition
In book collecting, the first edition is the earliest published form of a book. A book may have more than one first edition in...[more]
facsimile
An exact copy of an original work. In books, it refers to a copy or reproduction, as accurate as possible, of an original...[more]
gilt
The decorative application of gold or gold coloring to a portion of a book on the spine, edges of the text block, or an inlay in...[more]