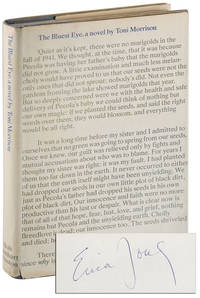 New York: Holt, Rinehart & Winston, 1970. First Edition. The Nobel Prize-winning author's powerful first novel, set in her home town of Lorain, Ohio in the aftermath of the Great Depression. Told from various perspectives, the novel is centered around the difficult life and many troubles of a young Black girl name Pecola Breedlove, touching on themes of beauty, religion, racial identity, and Black girlhood. In a moving memorial piece published in Vogue Italia (8 August, 2019), Jong writes at length about the deep connection she had to The Bluest Eye. "The year was 1970. My first book of poems, Fruits & Vegetables (1971) had just been accepted for publication by Holt Rinehardt & Winston. My editor there was the prophetic Aaron Asher who edited Saul Bellow, Philip Roth and the newly discovered Toni Morrison, then an editor at Random House. Aaron sent me a galley of a brand new book called The Bluest Eye...What I most remember about this book I read fifty years ago is that the little black girl thought she was ugly and clumsy and unlovable...This may have been the first time in my reading life (and I was a passionate reader of Russian novels and short stories and even Uncle Tom's Cabin by Harriet Beecher Stowe, which awakened me to the horrors of slavery in America) that I was asked to get inside the head of a little black girl who hates herself. I realized this author was doing something entirely new, that some people would rebel and dispute it, that others would be changed forever and I felt uncomfortable in the way great literature makes you uncomfortable. I remember writing a letter to the author telling her that I had never read anything as piercing as The Bluest Eye. Later, indeed, the book was banned in some places, as was my own Fear of Flying when it came out in 1973. But I understood that Toni Morrison was breaking down barriers nobody else had ever gotten close to." A distinguished copy of a significant debut. First Printing. Octavo (21.5cm); gray paper-covered boards and blue cloth backstrip, with titles stamped in silver on spine; dustjacket; [viii],164,[4]pp. This copy bears the ink ownership signature of American author and poet Erica Jong on the front endpaper, with two brief passages marked by her on pp.42-43. Sunning to spine, two small spots of soil to lower right edge of textblock, with some faint, shallow dampstaining to lower backstrip, and occasional tiny stains and some finger-soil to margins; Very Good+. Dustjacket is unclipped (priced $5.95), gently sunned and lightly edgeworn, with a few tiny nicks and tears, shallow loss to base of spine, shallow dampstaining along the lower edge, and a faint vertical line of offsetting along the front flap; Very Good.

The Bluest Eye is a 1970 novel by American author Toni Morrison. It is Morrison's first novel, written while Morrison was teaching at Howard University and was raising her two sons on her own. The story is about a year in the life of a young black girl in Lorain, Ohio named Pecola Breedlove. It takes place against the backdrop of America's Midwest as well as in the years following the Great Depression.  Brutal in its depictions of racism, incest, and child molestation, The Bluest Eye has remained on the often-challenged and banned books list almost every year since its publication.

Seller rating:
This seller has earned a 5 of 5 Stars rating from Biblio customers.
Biblio.co.uk member since 2010
Stephenson, Virginia
Ask Seller a Question

Cloth
"Cloth-bound" generally refers to a hardcover book with cloth covering the outside of the book covers. The cloth is stretched... [more]
octavo
Another of the terms referring to page or book size, octavo refers to a standard printer's sheet folded four times, producing... [more]
spine
The outer portion of a book which covers the actual binding. The spine usually faces outward when a book is placed on a shelf.... [more]
sunned
Damage done to a book cover or dust jacket caused by exposure to direct sunlight. Very strong fluorescent light can cause slight... [more]
First Edition
In book collecting, the first edition is the earliest published form of a book. A book may have more than one first edition in... [more]
good+
A term used to denote a condition a slight grade better than Good.