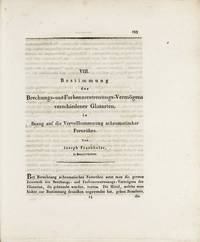 München: Lentner, 1817. 1st Edition. Soft cover. Very Good. 1st Edition. Soft cover. 4to - over 9¾ - 12" tall. In: Denkschriften der königlichen Academie der Wissenschaften zu München für die Jahre 1814 und 1815, vol. 5, pp. 193-226, 3 engraved folding plates (2 folding). München: Lentner, 1817. 4to (270 x 230 mm), whole volume [8], xlii, 62, 226, 91 [1] pp., including half-title, general title page, 4-page index and 13 engraved plates. Original wrappers with printed spine label (little dust-soiled and spotted, spine ends slightly frayed), all pages uncut. Small worm hole in front wrapper extending into half-title without affecting text, occasional minor spotting, page edges a bit dust-soiled and frayed at lower edge, two of Fraunhofer's plates somewhat browned as usual, otherwise generally crisp and clean. Provenance: Peter and Margarete Braune (tipped-in bookplate on inner front wrapper). An exceptional, unsophisticated and wide-margined copy. ---- Dibner 153; PMM 278a; Sparrow 70; Norman 836 (offprint); DSB V, p.143. - FIRST EDITION AND OF GREAT RARITY, of a fundamental paper in astrophysics. The journal issue of Fraunhofer's milestone paper is even rarer than the offprint issue because the journal appeard in a very small print run. We can trace only two copies of the journal issue at auction in the past 30 years (Richard Green Library sale, Christies 2008, and the Norman Library Sale, Christies, 1998). Fraunhofer, a skilled optician and designer of precision optical instruments, described in this paper, read before the Bavarian Academy in 1815, his accidental discovery of the absorption lines of the solar spectrum. In 1814, while conducting tests on the dispersion and refractive index for different kinds of optical glass, Fraunhofer "observed the effect of the refracting medium on light, comparing the effect of light from flames with light from the sun, and found that the solar spectrum was crossed with many fine dark lines, a few of which William Hyde Wollaston had observed and reported upon in 1802. [Wollaston had incorrectly interpreted the lines as borders between the colors]. Designating the more distinct lines with capital letters... he mapped many of the 574 lines that he observed between B on the red end and H on the violet end of the spectrum. Sometime later he noted that some of these lines appeared to correspond to the bright doublet of lines in many flame spectra; yet he noted further that while the pattern observed for the sun and planets [being reflected sunlight] appeared identical, the patterns for the sun, Sirius, and other bright stars differed from one another. He concluded that the lines originated in the nature of the light source. "These observations stimulated considerable interest for the next half-century among natural philosophers, whose speculations culminated in the classical explanation of absorption and emission spectra made by Kirchoff and Bunsen in 1859" (DSB). The dark lines, whose exact explanation has never been explained, are still known as Fraunhofer lines. Their discoverer continued to explore and map them during the following years; using a grating device of this own invention he eventually was able to determine the wavelengths of specific colors of light and to make highly precise measurements of dispersion (see below). Although his research was conducted with the purely practical aim of producing the finest possible optical instruments, Fraunhofer's achievements "justify describing him as the founder of astrophysics" (PMM). Plate 2, reproducing Fraunhofer's map of the lines of the solar spectrum, is the FIRST ILLUSTRATION OF THE SOLAR SPECTRUM.

Prices include German VAT for shipments within Germany or to consumers inside the EU. Shipping costs depend on shipping destination and are added on the price.

**VAT-ID**
VAT-Identification number according to German law §27a Umsatzsteuergesetz:
DE272372101

Person, responsible for the content on this web site according to § 55 Abs. 2 RStV (German act):
Jörn Koblitz
Schulstrasse 18A
27721 Ritterhude, Germany

**Online Dispute Resolution (ODR):**
Online dispute resolution according to Article 14(1) ODR-VO: The European Commission provides a platform for settling oline disputes. It is accessible under: http://ec.europa.eu/consumers/odr/

Seller rating:
This seller has earned a 5 of 5 Stars rating from Biblio customers.
Biblio.co.uk member since:
Ritterhude
Ask Seller a Question

About Milestones of Science Books

Milestones of Science Books offers valuable and rare books and prints in the fields of Exact Science, Medicine and Natural History.

wrappers
The paper covering on the outside of a paperback.  Also see the entry for pictorial wraps, color illustrated coverings for...[more]
First Edition
In book collecting, the first edition is the earliest published form of a book. A book may have more than one first edition in...[more]
title page
A page at the front of a book which may contain the title of the book, any subtitles, the authors, contributors, editors, the...[more]
offprint
A copy of an article or reference material that once appeared in a larger publication.
bookplate
Highly sought after by some collectors, a book plate is an inscribed or decorative device that identifies the owner, or former...[more]
plate
Full page illustration or photograph. Plates are printed separately from the text of the book, and bound in at production. I.e.,...[more]
device
Especially for older books, a printer's device refers to an identifying mark, also sometimes called a printer's mark, on the...[more]
edges
The collective of the top, fore and bottom edges of the text block of the book, being that part of the edges of the pages of a...[more]
crisp
A term often used to indicate a book's new-like condition. Indicates that the hinges are not loosened. A book described as crisp...[more]
spine label
The paper or leather descriptive tag attached to the spine of the book, most commonly providing the title and author of the...[more]
fine
A book in fine condition exhibits no flaws. A fine condition book closely approaches As New condition, but may lack the...[more]

Build a revolutionary library of literature that has been challenged or even outright banned. You'll be surprised by some of the titles in this gallery!

Home > Milestones of Science Books > Bestimmung des Brechungs- und Farbenzerstreuungs-…
Yes, we have a new look!
Let us know what you think.