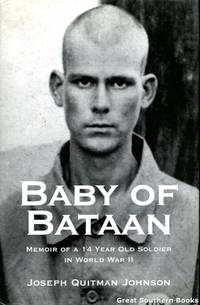 Baby of Bataan: Memoir of a 14 Year Old Soldier in World War II

Baby of Bataan: Memoir of a 14 Year Old Soldier in World War II

Omonomany, Memphis, Tennessee, U.S.A, 2004. 1st Edition. Hardcover. Near Fine/Very Good. 314 pages. This book is in near fine or better condition. It has no tears to the pages and no pages are missing from the book. The spine of the book is still in great condition and the dust jacket is generally unmarked. It has signs of previous use but overall is in really nice, tight condition. Items are shipped same day or next business day and are shipped directly from our Australian address. SYNOPSIS: A sweet musty tropical smell hung over the city of Manila in the spring of 1941. It was a city of warm monsoon winds, cold San Miguel beer, cabarets, and slender girls with hinting eyes. It was a plum duty station for professional soldiers and sailors, and many made a career there. In early 1941, Joseph Quitman Johnson enlisted in the U.S.Army. This memoir relates how he was thrown in with these older professional soldiers during the pre-war days of duty in Manila. It tells of his courage and bravery in the defense of Bataan, how he escaped the Death March to fight on the beaches of Corregidor, and finally his imprisonment in Japanese prisoner of war camps. It tells of forced labor, cruelty, disease, of surviving the sinkings of hell ships en route to Japan, and of working in condemned coal mines. It tells of the coming of age of a boy who joined the Army when he was only 14 years old. This story recounts actual incidents and events that occurred in his life. Many events were tragic, some heartless and inhumane. This is the story of two cultures at odds with the other, each at times unbending. Joseph Quitman Johnson lived this story and each of these events. He began this saga in 1941 at the tender age of 14 when he joined the Army. For whatever reason, fate chose him as one of those who was to survive these many ordeals. He was finally to taste freedom at the age of 19 when the war ended. This is a true story, his memoir. This is the story of an underage American soldier who grew up on the battlefields of Bataan and Corregidor and the Japanese prisoner of war slave labor camps in the Philippines and Japan. His hometown newspaper named him the "Baby of Bataan." Quantity Available: 1. Category: Military, Personal Memoirs, United States, World War II; ISBN: 1590960025. ISBN/EAN: 9781590960028. Pictures of this item not already displayed here available upon request. Inventory No: 0000904. . 9781590960028

We are an independent online bookstore and have been in business since 2012.

fine
A book in fine condition exhibits no flaws. A fine condition book closely approaches As New condition, but may lack the...[more]
tight
Used to mean that the binding of a book has not been overly loosened by frequent use.
spine
The outer portion of a book which covers the actual binding. The spine usually faces outward when a book is placed on a shelf....[more]
jacket
Sometimes used as another term for dust jacket, a protective and often decorative wrapper, usually made of paper which wraps...[more]