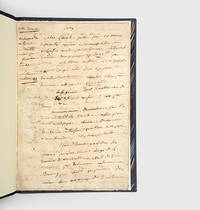 Valence: , July 1791. The young Napoleon responds with delight to the foundational work of political economy Folio (288 x 195 mm), 12 and a half pp. on a quire composed of 4 bifolia. Manuscript in French written in ink, comprising approximately 1,500 words in the autograph of Napoleon, clearly legible, margin traced in red crayon. Housed in a custom black calf book form box and matching folder. Offered together with a copy of Hitoshi Hashimoto's critical text, referenced below. Some light show-through, portion of inner margin of first page slightly scuffed and with traces of glue, otherwise in excellent condition. An exceptional manuscript in Napoleon's hand revealing his initial response to Smith's Wealth of Nations, captioned in the margin: "Notes diverses. Richesse des nations - Smith traduit par Roucher. Tome 1er. Valence juillet 1791". The manuscript is remarkable in establishing that Napoleon's first unguarded reaction to Smith's ideas was not in fact disdain, as he would later affect, but admiration. Napoleon was in garrison at Valence with the 4th Artillery Regiment from 16 June to 31 August 1791. He used his spare time to read the first volume of the French translation of Smith's Wealth of Nations by the poet Jean-Antoine Roucher (1745-1794), made from the fourth English edition (London, 1786), which had been published in 1790. Napoleon has written at the top of the first page "Cayer -", leaving a space blank for a projected numbering. He focusses in particular on five chapters of Book I: Chapter 1, Of the division of labour; Chapter 3, That the division of labour is limited by the extent of the market; Chapter 4, Of the origin and use of money; Chapter 5, Of the real and nominal price of commodities, or of their price in labour, and their price in money; and Chapter 8, Of the wages of labour. The last note in Napoleon's hand is: "The labourer and the farmer are superior in intelligence to the ordinary class of artisans". Smith's biographer remarks: "It is clear from the notes that Napoleon is delighted with Smith's picture of economic life, particularly in relation to wages, price, transport, the concept of a European market, and the division of labour resulting in the mass production of pins ('cela paraît incroyable')" (Ross, p. 18). It later suited Napoleon to disdain Adam Smith, as did many French economists, because he had been critical of Colbertism, but in power he was happy to give free rein to his Minister of the Public Treasure, François Nicholas Mollien, who was a lifelong, vocal admirer of the Wealth of Nations. Provenance: a) the leaves were once part of Phillipps MS 22769, docketed by Phillipps "161 Cole MSS" in pencil, Cole being an autograph collector likely to have obtained the notes from Guglielmo Libri who stole the Napoleon archive and sold the bulk of it to Lord Ashburnham (returned to France 1883); b) sold at auction, Charles Hamilton Galleries, Inc., 10 December 1970, lot 224; c) Hoffman & Freeman, Antiquarian Booksellers, Cambridge, MA, USA, cat. 33, April 1971, no. 143; d) in 1982 the notes were kept in the Buddhist temple of Jinyaji, Chiba, Japan; see text and commentary by Hitoshi Hashimoto in "Notes Inédites de J.-B. Say Qui Couvrent les Marges de la Richesse des Nations et Qui la Resument", Kyoto Sangyo University Economic and Business Review, 9, 1982, pp. 35-42. A copy of Hashimoto's text accompanies the manuscript. Ian Ross, "Adam Smith: A Biographical Sketch", Hiroshi Mizuta & Chuhei Sugiyama, eds., Adam Smith: International Perspectives, Macmillan, 1993.

leaves
Very generally, "leaves" refers to the pages of a book, as in the common phrase, "loose-leaf pages." A leaf is a single sheet...[more]
calf
Calf or calf hide is a common form of leather binding.  Calf binding is naturally a light brown but there are ways to treat...[more]
folio
A folio usually indicates a large book size of 15" in height or larger when used in the context of a book description....[more]